Posted on October 2, 2018 by Office of Public Affairs 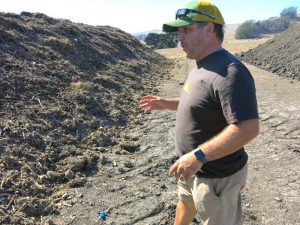 Loren Poncia of Marin County is one of dozens of California carbon farmers—participants in a promising state effort to suck climate-threatening carbon out of the air. Photo by Alastair Bland for CALmatters

Loren Poncia’s idling pickup shudders in a powerful gust of afternoon wind in western Marin County. Inside the warm cab, he scans the sun-browned hills through his binoculars, counting his grazing cows. Poncia raises beef cattle. As he sees it, though, what he is really doing is raising soil.

“I’m growing grass to feed to my cattle, but it all comes down to having high-quality soil,” said Poncia, who owns Stemple Creek Ranch with his wife, Lisa.

He is among more than 80 farmers now engaged in a state-funded program aimed at increasing carbon concentrations in California’s soil. Part of the state’s overarching goal of curbing greenhouse gas emissions to mitigate climate change, the California Healthy Soils Initiative took effect a year ago, when the state’s cap-and-trade program made $7.5 million available in small grants to farmers like Poncia. This year, the Healthy Soils Program, one component of the initiative, is receiving about $15 million.

That money is used to encourage and implement carbon farming—the buzz term for any strategic agricultural practice that helps suck carbon atoms from the air and into plant tissue and the ground faster than carbon cycles back out. Over time, the process creates rich, carbon-black soil. A  growing community of scientists now believe carbon farming will be essential in helping curb global warming trajectories.

Participating farmers add heavy layers of compost to invigorate plant growth while avoiding tilling, which exposes raw soil to the air and allows carbon atoms to bond with oxygen and float off as carbon dioxide, a potent greenhouse gas. More than half of the Earth’s historic soil carbon has been released into the atmosphere by unsustainable farming, according to researchers in the field, and the mission of California’s new policy is to put some of that carbon back in the ground.

“But we need to do this at a mass scale—we need hundreds of thousands of acres engaged in this,” said Torri Estrada, executive director of the Carbon Cycle Institute, a Petaluma-based climate solutions think tank.

The top roughly 8 inches of U.S. cropland and grassland soils five years ago contained more than 18 billion tons of carbon, according to a paper in the Journal of Soil and Water Conservation. The authors, including Ohio State University soil scientist Rattan Lal, found that U.S. carbon farming eventually could lead to annual carbon sequestration of 83 million tons per year on agricultural soils. Given all available lands in the country, including forests, as much as 475 million tons of carbon could be put into the ground each year.

That’s significant, if not huge: California alone emitted 472 million tons of CO2 equivalent (CO2 isn’t the only greenhouse gas) in 2016, according to the state’s Air Resources Board.

In an interview, Lal acknowledged that although “U.S. soils can technically achieve this,” even modest carbon sequestration goals may be a long shot for the United States, politically.

Estrada says it’s reasonable to expect well-managed pasture land to sequester half a ton of carbon per acre per year. By that formula, a farmer with 1,000 acres of land could potentially offset the carbon dioxide emissions of 500 active vehicles. Statistically significant changes in soil carbon levels, however, can take decades to appear.

The California Department of Food and Agriculture, which manages the soils program, has handed out carbon farming grants to growers in more than 30 counties, including some conservative ones where climate science skepticism may be relatively common.

“Some farmers have very strong political views, but I don’t think they would ever avoid doing something that’s good for their land just because it might also politically benefit someone else,” Kjos said.

“If we want to maximize the amount of carbon in soil and produce food, there is no need to coin a fancy new term,” Barsotti said. “That method exists—it is certified organic agriculture.

“If getting as much carbon into the ground becomes your entire focus, you can’t also grow vegetables. Ultimately, these methods of farming they’re promoting make it more expensive to grow food.”

Though it’s still early in Poncia’s carbon-farming run, this so far seems to be the case. He said the out-of-pocket cost of creating his enormous compost reserves, which he has amassed on a hilltop, was almost $60,000—double what his three-year state grant will cover. Still, he’s gambling that spreading the fertilizer over his land will eventually result in more forage, more beef and more profit.

As the Healthy Soils Program enters its second year, proponents say the state is under-funding it. Estrada contends incentives should be $80 to $100 million.

“It needs to be on par with other programs,” he said. “Carbon farming is one of the pillars of the governor’s climate strategy, and it gets far less money than the other sectors.”

This could change with time, said Jenny Lester Moffitt, the undersecretary of the California Department of Food and Agriculture. “As this program builds and gets more support, I imagine the Legislature will respond and offer more money to the program,” she said.

At Stemple Creek Ranch, Poncia stands in the whipping wind, admiring his mountainous compost heaps. One is composed entirely of uprooted apple trees—debris that otherwise would be burned.

“This is mostly carbon, and it’s going back in the ground,” he said.

His enthusiasm for carbon farming is rooted largely in the ecological benefits that may come with restoring soil carbon. He has, for instance, planted native trees along a small creek gully.

“There’s carbon being sequestered here and there’s 35 species of birds that nest here,” he said. “So, we’re creating amazing habitat at the same time that we’re carbon farming.”

He also believes in the theory—that eventually he will be making more money. In fact, he plans to forge ahead, with or without state funding. He said he hasn’t spent any of his grant money, and he might even withdraw from the Healthy Soils Program.

“They require that you put compost on the same pasture each year for three years, and that’s a real pain, and I don’t believe it’s necessary, so I might just pull out,” he said.

Still, he is eager to see more government programs that support climate-friendly farming.

“What I really think would be awesome is if the federal government went from subsidizing corn and soybeans and rice to subsidizing carbon, assuming we could find a really good measuring tool for soil carbon,” he said. “The thing is, farmers always overproduce everything, and if we subsidized carbon, they would overproduce carbon. That would be the quickest, simplest, easiest way to help reverse the effects of global warming.”

See the original Post on the CALmatters site here.

This entry was posted in Climate Change, Climate Smart Agriculture. Bookmark the permalink.