Posted on October 4, 2018 by Office of Public Affairs 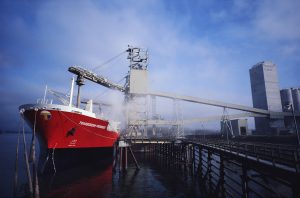 In the escalating trade conflict between the U.S. and China, more California agricultural products now face new retaliatory tariffs in one of their export markets.

China has implemented a new round of tariffs on $60 billion worth of U.S. goods, including a wide range of foods and agricultural products. The tariffs came in response to new U.S. duties on $200 billion in Chinese imports.

Some products are new to the growing list being hit with retaliatory tariffs, whereas others such as wine are incurring multiple hits with this current round.

U.S. wine previously faced an additional 15 percent tariff in April, when China first imposed tariffs on $3 billion worth of U.S. products in retaliation for new U.S. tariffs on steel and aluminum imports. This week, China implemented new tariffs of 5 percent and 10 percent on U.S. wine, sparkling wine and other wine-based beverages. When compounded with existing duties, the new total tax rate will equal 79 percent, the Wine Institute said.

Despite the increased tariffs, U.S. wine exports to China and Hong Kong—90 percent of which are from California—went up 34 percent to $118 million during the first seven months of this year, the institute reported.

“While increased tariffs are challenging, Chinese consumers are clearly attracted to California wines and appreciate the high quality and great diversity of wines from the Golden State,” said Linsey Gallagher, the institute’s vice president of international marketing.

Roger Isom, president and CEO of the California Cotton Ginners and Growers Association, described the increased tariffs on cotton as “devastating” because the state exports 100 percent of its cotton, with the majority going to China. California cotton exports to China were valued at $88.5 million in 2016, according to the California Department of Food and Agriculture.

The higher tariffs come at a time when Chinese cotton reserves are depleted and demand is high for the state’s higher-end pima cotton, Isom said.

“Prices on the lint side are very good—or were,” he said. “Once these tariffs started coming out and started being announced, the market has dropped and, more importantly, contracts have been canceled or (there are) no new contracts. We’re sitting on pins and needles as to what’s going to happen.”

Though cotton exporters are looking to alternative markets—California also ships to Europe, Southeast Asia and Mexico—Isom said “those other markets aren’t looking for what we have” or aren’t willing to pay the prices the state’s high-end cotton commands.

He said he’s “very concerned” the tariffs will remain in place past December and into next year, noting that historically when cotton prices become too expensive, buyers turn not only to lower-quality cotton but alternative fabrics such as polyester and rayon.

For crops such as cut flowers, the new tariffs have stalled any efforts to gain additional trade opportunities in China, said Kasey Cronquist, CEO of the California Cut Flower Commission. Though the group completed its second trade mission to China in June and some farms have been establishing business relationships there, he said “the current situation has us in a holding pattern” until the trade disputes resolve.

“We were already facing steep tariffs into China and don’t have so much trade going into China,” Cronquist said.

Ismael “Mel” Resendiz, a flower grower in San Diego County who specializes in proteas, was part of the commission’s trade mission and described China as “a big potential opportunity for our business.” Because China’s climate and soil are not well suited to growing the type of exotic flowers he produces, buyers there want his products, he said.

“It was a huge opportunity to expand our business in China, but with whatever is going on right now, looks like it’s not going to happen,” Resendiz said.

For now, he said he will focus on his existing export markets, including Japan, Canada and South Korea, which he described as “really good and growing.”

For the 30 timber companies in California, the ongoing trade disputes and tariffs have been “a mixed bag,” depending on the type of wood they produce, said Rich Gordon, president of the California Forestry Association. A wide range of wood products now face a 10 percent tariff going into China. He said a couple of companies that had orders pending to China reported canceled sales due to the new tariffs.

Because wood is not perishable and can be stored, he said some companies will “hold onto product and see what happens to the markets.”

Meanwhile, shelled almonds and fresh sweet cherries have been added to the commodities eligible to receive direct payments under the Market Facilitation Program, part of a three-part, $12 billion aid package meant to help U.S. farmers directly affected by retaliatory tariffs. Previously, payments were available only to producers of soybeans, sorghum, corn, wheat, cotton, dairy and hogs.

This entry was posted in Trade. Bookmark the permalink.