Posted on October 22, 2018 by Office of Public Affairs 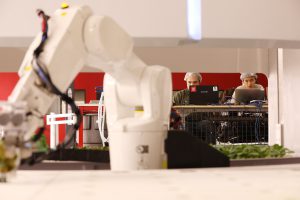 Photo from the San Francisco Chronicle

Angus doesn’t look like your normal farmer. He’s more of a giant, docile rectangle, built to lift 800-pound containers filled with water and seedlings and wheel them over to his partner robot, which looks like a giant arm with twin cameras set next to its gripping fingers.

It has taken a San Carlos company named Iron Ox three years to build these two core pieces of technology. As of Wednesday, they’re officially at work at the country’s first robotic farm.

Founders Brandon Alexander and Jon Binney met at the influential Silicon Valley robotics lab Willow Garage and quit their jobs in 2015 to dive into the farming world. “Let’s not build robots until we talk to a bunch of farmers,” Alexander said the pair decided. They road tripped all over California, asking farmers what their biggest point of concern was.

The answer was clear: labor scarcity.

According to a 2017 survey of 762 farmers conducted by the California Farm Bureau Federation, 55 percent of those polled reported labor shortages, and that figure was closer to 70 percent for those who relied on seasonal workers. Many had raised wages in an effort to attract laborers, but 33 percent of farmers said they were also turning to automation.

Some robotics research is focused in the area of weeding and pruning, others on harvesting apples or strawberries. In the Salinas Valley, some lettuce growers have adopted automation in the form of high-pressure “water knives” that move along the rows, cutting the bottoms of the heads and feeding them up to workers via conveyor belts, a process that eases the burden on workers’ backs.

Fully articulated robots like the ones operating at Iron Ox are rare. “When it comes to automated, advanced mechanization, and specically robotics, we’re very early in the game,” said Dennis Donohue, director of the Western Growers Center for Innovation and Technology, an agriculture-tech incubator program.

Watch video of a farm robot at work

According to market research, about $1.1 billion of investment has been poured into agriculture tech this year, up from $73.5 million in years before. Robotics still represents a small sliver of that funding.

Alexander and Binney have required only $6 million to build Iron Ox, after graduating from the incubator Y Combinator in 2016. The company has since graduated from its initial research and development facility to an 8,000-square-foot warehouse with a smooth poured concrete door, a gated area filled with engineers, plant scientists and their computers, as well as a reception room with cafe tables and a window overlooking the 2,000-square-footgrowing area.

Iron Ox’s goal is to create a replicable and scalable model that can produce vegetables for Midwestern Costcos rather than for four-star restaurants. The company’s prototype farm consists of several dozen containers in which greens and herbs grow in about a foot of nutrient-dense water: butterhead lettuce and basil, sure, but also dinosaur kale and upland cress.

Despite their size, the containers can be closely spaced, since Angus can maneuver — all by itself — down the rows to pick up the ones it (or its programmers) wants. For now, humans take readings to adjust the nutrient balance in the water, and humans harvest the greens when they’re fully mature. But Iron Ox has automated many of the other repetitive, back-bending tasks. The biggest challenge isn’t getting robots to pick up 800-pound containers. It’s training Angus to move the container without splashing, and programming the arm to gently maneuver around tender leaves.

Growing vegetables hydroponically in indoor greenhouses saves 90 percent on water and avoids the need for pesticides or herbicides, Alexander said. Because the robots can constantly shift the plants around so they’re spaced farther and father apart over their four to six weeks of growth, Alexander estimated that Iron Ox will be able to produce 30 or 40 times what a conventional greenhouse of the same size could, operating year round.

Two other Silicon Valley companies — Crop One and Plenty — are building “vertical farms” to grow lettuce in enclosed warehouses under LED lighting. (Neither is selling to retailers, but you can find Plenty’s spring mix at Creator, the San Francisco hamburger-cooking robot restaurant that opened to the general public last week.)

Iron Ox said that its goal is first to move into a local greenhouse with natural light — the sun is cheaper than LED lights — and then expand to greenhouses all over the country, bringing freshly grown produce to regions with short summers as well as rural areas with little access to grocery stores.

The company is not building fleets of Anguses for other farmers: It’s selling the greens itself. Iron Ox has no current customers, but as of Wednesday (Oct 3), it’s inviting professional chefs to tour the farm. The anticipated price of a head of lettuce? A dollar, as close to the industry standard as possible.

The Bay Area is an ideal testing ground for robotic farms because of the proximity to Silicon Valley’s engineers and capital. At the same time, when it comes to salad greens there are few more competitive markets on the planet. The company has hired plant scientist Nicole Bergelin to diversify what the farm produces. She has added purple bok choy, fenugreek greens and broccolini, helping the engineers train the robots to work with each. “All the robots in the world don’t matter if we can’t grow great produce,” Alexander said.

Watch video of a farm robot at work