Posted on November 6, 2018 by Office of Public Affairs 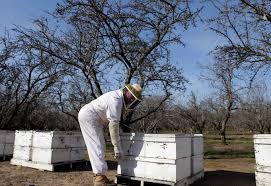 California agricultural commissioners now have the regulatory “teeth” they sought to enforce bee registration each year – something they long complained was needed to protect the pollinators.

Pest control advisors at the recent annual meeting of the California Association of Pest Control Advisors (CAPCA) were the first to publicly hear about the 18-month effort to force compliance of a law long-ignored, according to Ruthann Anderson, CAPCA chief executive officer.

Dubbed “Bee Where,” the new program gives agricultural commissioners the authority to seek civil penalties of not more than $500 per day a beekeeper is in violation of the law. While previous law required beekeepers to register their bees with county agricultural departments, it was effectively unenforceable, said Riverside County Agricultural Commissioner Ruben Arroyo. The new law that goes into effect Jan. 1, 2019 makes it unlawful to maintain an unregistered apiary.

The website http://bewherecalifornia.com was set up to help growers, PCAs and beekeepers understand the program.

Arroyo and Anderson promoted the program to over 1,000 PCAs at the association’s recent annual meeting in Anaheim, Calif. Part of the effort there was to highlight ongoing efforts to protect pollinators, which has gained steam in recent years as beekeepers continue to seek answers into higher rates of winter mortality and bee deaths.

While certain classes of pesticides and chemical tank mixes have been blamed for bee deaths, Anderson sees the program as a good first-step to begin collecting data that might help close in on the true cause of bee mortalities.

Beekeepers will be required to pay an annual $10 registration fee beginning in 2020.

The legislation requires anyone who moves bees into the state or otherwise comes in to possession of an apiary to register the name of the owner, the number of hives and the location those colonies will be moved to within 30 days of arrival. Moreover, relocation of hives within the state will now require a phone call to the destination county agricultural commissioner within 72 hours of first movement. The same applies to hives moved within a single county.

Bee owners must also be on record, either directly or through their designated representatives. This includes name and address of the appropriate party. Hives must also be marked with identifying information.

The program will use the latest computer technology to map bee colony locations. The intent is to have locations linked through Agrian, so when a PCA writes a recommendation through the program, an instant flag will go up if beekeepers are registered within a mile of the planned application site. Arroyo says details of this are still being worked out, but early indications suggest that PCAs will be given various crop protection alternatives if bees are nearby.

“It will come up with a list of suggested softer chemicals to use, but we’re still working with Agrian on this,” Arroyo said.

If there are bees registered within a mile of the planned application site, contact information on the owner of the bees will be provided. Beekeepers can register various means of contact, including phone, email and fax, Anderson said. Beekeepers will be given 48-hour notice prior to spray activities near their hives.

The program is also hoped to have a smart phone app available, so growers, beekeepers and regulatory agencies can search for and tag bee hive locations. County inspectors can then verify these locations to determine if hives are registered and act on those that are not registered.

Anderson says pilot launch of the program will begin with the 2019 almond bloom. A second phase starts a year later with feedback from various stakeholders and expansion of the technology to eventually include reporting of unmarked and unregistered bee hives and information to aid investigations into bee kills.

NOTE –  CDFA continues to work on bee-related issues with a pilot project in North Dakota to inspect bees in other states for the presence of invasive species before they’re shipped to California. This would reduce the amount of time hives would spend at Border Protection Stations.