Posted on June 4, 2012 by Office of Public Affairs 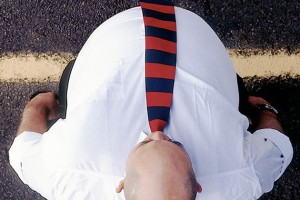 New York Mayor Michael Bloomberg was in the headlines last week for his proposal to ban soft drink servings over 16 ounces. It’s the latest front of his war against obesity, which kills 5,000 residents in the city each year. (The mayor is the founder of Bloomberg LP, which owns Bloomberg Businessweek.)

The U.S. is a heavyweight champion in fat. It has the most obese population of any industrialized nation. About two-thirds of all adults in the country are overweight and one-third are fully obese, according to the World Health Organization.

This, however, is yet another area where U.S. leadership is being challenged by upstart contenders from the developing world. Already, a larger proportion of people in Panama, Saudi Arabia, and six different Pacific Island nations are obese than in America. Growing obesity in poorer countries is a sign of a historic global tipping point: After millennia when the biggest food-related threat to humanity was the risk of having too little, the 21st century is one where the fear is having too much.

From 1980 to 2008, according to the World Health Organization, worldwide obesity rates almost doubled. A recent study in the Lancet medical journal concluded that in 2008, about 146 billion adults globally were overweight and 502 million were obese. Around half of the adult population in Brazil, Russia, and South Africa are overweight and about 8 percent of all African adults are obese. According to the Lancet study, the worldwide health cost attributable to obesity and its consequences added up to 36 million disability-adjusted life-years (a measure of healthy years of life lost to a disease).

It may seem strange to be worried about too much food when the United Nations suggests that, as the planet’s population continues to expand, about 1 billion people may still be undernourished. Although there are good reasons to think the 1 billion estimate might be exaggerated, it is clear that hundreds of millions do still regularly go to sleep hungry. The issue isn’t so much that we can’t grow enough. Rather, existing food supplies are so poorly distributed that those hundreds of millions have too little for their own health, while 2 billion-plus have too much. Even within families, malnutrition is often a distribution issue: How else to explain that about one in 10 households in Russia contain both underweight and overweight members? And ever since Amartya Sen did his Nobel Prize-winning work on the causes of famine, we’ve known the solution to starvation is usually very simple: Ensure poor people have enough money to buy food.

As poverty declines—and the percentage of the population worldwide living on less than $1.25 a day has halved since 1990—fewer people will be too poor to buy enough to eat healthily. The Lancet study reports that the relationship between income and nutritional status breaks down after countries reach an average income of $5,000. Once a country is over that line, the considerable majority of people have the ability to eat enough, and the choice to eat too much. A $5,000 average income is a little more than India’s, at $3,700, about where Indonesia is today ($4,700). China’s average income is $8,400.

When it comes to food, we are living in a world of plenty. For those worried about agricultural sustainability, there is a lot of slack in the system. A third of food production is simply wasted worldwide—spoiled before it reaches consumers or thrown away after that. Continued increases in agricultural productivity, thanks to new seed varieties and more efficient farming practices like fertilizer micro-dosing and drip irrigation, mean that sustainably feeding the world’s population, even if it grows past 9 billion, is eminently achievable. The big public health challenge around food over the next 50 years will not be how the planet grows enough to prevent mass starvation, but how it avoids fat becoming the No. 1 killer.

The bad news is that the global obesity epidemic is a more complex problem than the conditions that felled most poor people in the past. Many common killers like measles can be prevented by a vaccine, malaria can be battled with bed nets and insecticide spraying, and diarrhea is a condition where large quantities of sugar water is actually a plus—add a little salt and you’ve got the perfect treatment for dehydration.

Obesity, on the other hand, has a whole range of different causes and no simple public health solution. The increasing numbers of people worldwide who earn a living sitting down rather than moving around, as services overtake agriculture as the biggest employer, mean the amount of calories the average human needs to consume is actually falling. But agricultural productivity has led to a dramatic long-term decline in the cost of food at a time when growing wealth is providing more resources to buy sugary and fatty products. That wealth also attracts marketers and junk food companies like bears to honey. Pretty much any country with a McDonald’s is experiencing a growth in obesity. And just shouting “eat less fat and sugar” at people doesn’t seem to work too well as a response.

As vexing a challenge as obesity might be, it is worth noting two things. First, it is a disease of choice—even if choosing to eat right can be very hard. Nobody chooses to be stunted by a lack of nutrition. Second, there are some signs of approaches that work to improve the choices people make. In 2003, near the start of Mayor Bloomberg’s campaign against fat, New York City banned sweet drinks from schools. Perhaps partially as a result, obesity rates in public school kids have fallen by 5 percent in the last four years.

The problem of global plenty is a real one. But for all of New York’s—and the world’s—challenges with excess, it is still considerably better than the reverse.

One Response to Bloomberg Businessweek – The Global Obesity Bomb