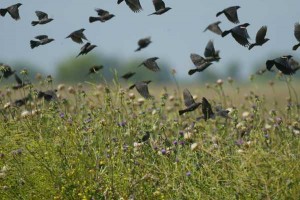 Shortly before harvest this spring, thousands of rare birds suddenly flocked to a Tulare County wheat field and nested — setting the stage for a vast killing field with baby birds.

But the dairy farmer who was growing the wheat as feed for his cows delayed long enough to save thousands of tricolored blackbirds, averting a wildlife disaster.

He was one of four dairy farmers in the San Joaquin Valley who held off harvests this year to protect more than 20% of the tricolored blackbird’s global population. The federal government spent $100,000 helping the farmers replace the feed.

It’s a success story that seems as rare as the tricolored blackbird. In an era when regulation and lawsuits drive environmental reform, this voluntary collaboration saves birds, keeps dairy farms in business and leaves out lawyers.

Western United works with Audubon California and government agencies to save the remaining blackbirds, which once numbered in the millions. There are 260,000 left in the world, and more than 95% of them are in California.

For dairy owners, the partnership makes sense because it is a major influence in keeping the bird off the protection list for the federal Endangered Species Act, which can be stifling to business and industry.

But nature also plays a part. The tricolored birds gather in huge breeding colonies — they are the most colonial birds in North America. It’s not unusual to see 30,000 in a single farm field.

Decades ago, they nested in the coastal wetlands and inland marshes of Central California. But their historic breeding grounds have disappeared as development and farming spread during the last century.

The birds still nest wherever they can find freshwater marshes among the cattails in the Valley. But the blackbirds will readily settle for alfalfa, hay and wheat fields where they can easily fill their dietary needs.

It results in a nervous turf conflict with dairy farmers, who need the silage to feed their herds.

The birds are protected under the Migratory Bird Treaty Act, as well as being a species of concern for both the state and federal government.

But the powerful Endangered Species Act is not yet involved. An example of its impact: Irrigation water deliveries from Northern California have been slowed or stopped to protect dying fish species.

The Center for Biological Diversity, an Arizona-based nonprofit environmental watchdog, sought the protection of the act several years ago. But federal leaders declined, saying there was not yet enough evidence.

Now nobody is pushing for the act, said Keillor Kyle, an expert with Audubon on the tricolored blackbird. “We are pleased that farmers are willing to help protect this native California bird,” he said. “Everybody is onboard with pushing up the numbers of this bird.”

The challenge is spotting the birds and reacting quickly enough to save them in spring. The birds arrive at farm fields in March and April, just before silage crops are harvested.

Everyone — from Audubon volunteers to staffers on government wildlife refuges — is on the lookout for possible nesting sites throughout the Valley. Everyone involved does a lot of driving and looking in spring.

When farmers spot a breeding colony, they can notify the Natural Resources Conservation Service, part of the Agriculture Department, which has field biologists who help track the birds. The agency also provides financial assistance so farmers can delay the harvest.

The Tulare County dairy farmer who saved thousands of birds this year worked with federal biologist Jesse Bahm. He and other dairy farmers involved chose not to be interviewed.

“We try to sign up as many willing farmers as we can find,” said Alan Forkey, the service’s assistant state conservationist, based in Davis. “We’re reaching out to let people know our program is here.”

But Forkey and others say it’s not enough to simply avert massive losses in silage fields. They want to develop alternatives for blackbirds to nest in natural habitat, rather than in farm fields.

The remaining wetlands in the Valley could be flooded in spring to attract the blackbirds, said Kyle of Audubon. He said private land as well as state and federal wetland refuges could play a role. Kyle is looking for help from any agency or individual who is willing.

“California had one of the biggest wetlands systems in the world at one time,” Kyle said. “Spring flood events were natural. If we could provide the natural habitat, the birds would move away from dairies.”