What happens to school gardens in summer?

Posted on August 6, 2012 by Office of Public Affairs 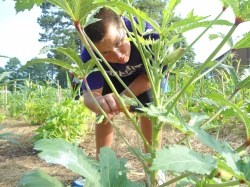 The biggest irony of the school garden is that it often goes untended during summer, the peak season. This is no coincidence; what we now call “summer vacation” used to be the time when most parents needed their children at home in the fields, planting and harvesting.

Now that the majority of Americans are no longer farmers, however, schools have become many children’s sole exposure to agriculture. But the good news is that they’re far from scarce; schools across the country are scrambling to set up food-producing gardens and take advantage of the hands-on lessons they provide.

Alice Waters’ “edible schoolyard,” while no longer considered revolutionary, is still a model for many teachers. FoodCorps, a branch of the AmeriCorps Service Network dedicated to food education, is wrapping up its first year of garden programming in selected schools, and many school districts and nonprofits are embracing school gardens at the local level. But what happens to all these gardens when school’s out for summer?

“There are kinks that haven’t been worked out in a lot of these newer school gardens, summer maintenance being one of them,” said Dana Stevens, a Food Corps member stationed in rural Washington County, Maine. When she arrived, the crop of brand-new school gardens in the area was mostly either left untended June through August or maintained by faculty or community volunteers.

This year, Stevens tried to organize the process. At one of the schools where she’d worked during the year, she created a garden work party schedule for the summer, turning a volunteer chore into an opportunity for a community get-together every couple of weeks. At another school, Stevens ran a weekly summer garden program for second through sixth graders. Every Wednesday, her group of 13 did garden upkeep, played garden-related games, and finished the day by harvesting and cooking a meal together.

Katy Brantley, serving FoodCorps in Monticello, Ark., took a similar approach with the garden at the middle school where she taught. At the end of the school year she put out applications for summer garden interns, and ended up with about 10 kids who would come a couple times a week to help maintain the garden and, like Stevens’ students, cook with fresh ingredients. She said many of these kids hadn’t actually taken garden classes during the school year, so the summer program served as a way to open the curriculum to everyone.

“I [found] some kids who are very dedicated and excited about coming to garden,” Brantley said. “It’s been much easier to keep it alive. It’s not beneficial for just me to be out there.”

Rachel Pringle, director of programs for the San Francisco Green Schoolyard Alliance, said that while the mild California climate means summer can serve as the dormant season for some gardens, “it’s also really wonderful to come back in the fall and have things ready to harvest.” To that end, many of the 80-plus gardens in the alliance have developed summer programming like cooking camps or internships. Schools with heavy parent involvement can rely on families to volunteer for a summer garden maintenance schedule, and in a city with epically long waiting lists for plots at community gardens, such volunteer work has the added benefit of offering would-be gardeners an area of their own to grow things, if only for a limited amount of time. “There are parents actually interested in growing food for themselves over the summer,” Pringle said. “In an urban environment they didn’t have that [space] at home.”

Of course, some volunteers inevitably neglect their garden-work duties. But, Pringle said, “the wonderful thing is that school gardening is an experiment. It’s fun, it’s wild — they’re not perfectly manicured gardens.” And a slightly overgrown plot offers a great opportunity for kids to jump right in and get their hands dirty cleaning it up at the beginning of the school year.

Beyond the practical benefit, summer programs can also be an ideal setting for garden education. Stevens said having students for a full day gave her much more freedom to let lessons follow their natural course. “[It’s] not just a 40-minute classroom session where they’re in and out and may or may not remember what they did that day,” she said. “We can explore what’s actually happening in the garden and what people are interested in.”

Both Stevens and Brantley said having more time to cook in the summer also made a key difference. “It’s really important to have both pieces — working in the garden and learning to use what’s coming out of it,” Stevens said. “When I go into schools to do classes we have to choose one or the other.”

Students can forget a lot of what they learn over summer break — including food and garden lessons. That’s why, Pringle said, “creating an outdoor classroom culture at your school” is a critical part of turning kids into gardeners. “If you have a summer program, that is just reinforcement of all those skills and the culture they’ve been learning throughout the year.”

Though Stevens and Brantley are now wrapping up their yearlong FoodCorps commitments, they’re leaving their schools’ gardens in good shape for the next crop of service members to expand their efforts. After all, as Pringle put it, “school gardens should never be finished.”