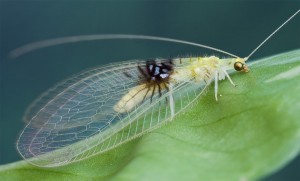 Meet the “Flickr Lacewing.” That’s what some folks online are calling a newly discovered insect species, more formally known as “Semachrysa Jade Winterton, Guek and Brooks.” It was given this name by Dr. Shaun Winterton, a senior insect biosystematist (that’s “bug doctor” to the rest of us) for the California Department of Food and Agriculture. He specializes in lacewings, which are beneficial insects that naturally control pests. When Dr. Winterton happened to find a photograph of a previously unknown type of lacewing on the online photo sharing site Flickr last year, he knew he was looking at something special. He had never seen wing markings like those. So he set about collecting as much information as he could from the man who snapped the photo – Hock Ping Guek, a photography enthusiast in Malaysia who blogs about his startlingly beautiful photographs of beetles, spiders and other bugs. 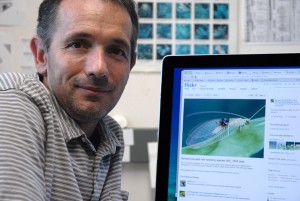 CDFA scientist Dr. Shaun Winterton and the online photo of the “Flickr lacewing.”

Well, it was a rough start because the photographer had no sooner lifted his trigger finger when the lacewing departed, so the photo was all that remained – no physical sample that could be used to verify the discovery. As it turns out, even in the Internet age, there is no substitute for the real thing—scientists generally require the insect itself, collected and submitted for analysis of such specifics as mouth parts, reproductive organs and so forth, to make sure they know what’s what.

To make a long story short, about a year later, the Malaysian photographer contacted Dr. Winterton with great news: another identical lacewing had been found in the same place and was sitting on his kitchen countertop. Properly captured and preserved, the sample made its way around the globe to CDFA’s lab in Sacramento, where it was identified as a new species and named.  Fellow entomologist Dr. Stephen J. Brooks at the Natural History Museum in London helped verify the identification. A paper published in the peer-reviewed journal Zoo Keys described how it all came to pass. The photographer, who shares credit for the discovery, gave his blessing for the bug to be named Semachrysa Jade, after Dr. Winterton’s daughter, Jade.

Using Flickr to help name a new insect may be a fairly new idea, but naming insects (or plants, fungi, and diseases) isn’t out of the ordinary for CDFA scientists; it’s what they do. Keeping a close eye on tiny bugs helps protect our food supply. And when a California lacewing taxonomist can harness the Internet to collaborate on a new discovery with a Malaysian photographer half a world away, well, that’s just plain cool.