VISALIA, Calif. — The task force fighting the Asian citrus psyllid is not prepared to declare victory in California, but it seems to have the enemy surrounded.

Infestations of the psyllid, which was first discovered in the U.S. near San Diego in 2008, continue to pop up in the Los Angeles area, said Ted Batkin, president of the Visalia-based Citrus Research Board. 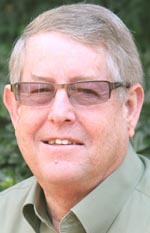 “Our joint focus is to concentrate on the inner core of the L.A. basin and to drop those populations down, so they’ll quit pushing out of the area,” he said.

“Our strategy is to treat all discoveries in a 400-meter radius.”

Aware of the heavy damage the disease caused in Florida and in some foreign countries, growers have stepped forward to fund a major portion of the cost of keeping the pest under control.

“The growers are continuing to heavily invest at the rate of $20 million a year,” Batkin said. “The funds cover detection, research, treatment and public relations.”

Public service announcements on the radio and television and meetings with local government officials are paying off, Batkin said.

“Everybody has been helpful, but the area’s Hispanic and Indian communities have been fantastic,” he said.

The fact that those Southern California residents are aware of psyllid populations in Mexico and India is likely a factor in the cooperation the task force is receiving, Batkin said.

While there has been progress, eradicating the psyllids and preventing the disease from reaching California will be a long term affair, he said.

“I’d say we’re three to five years away from knowing what the compound is that’s going to work — and another several years of testing before we can actually put it into practice in the fields,” Batkin said.

“I’m going to say in less than 10 years we shall have solutions that we’ll be testing and then able to move into commercial application.”

In the interim, the trap-setting continues at an accelerated pace in nearly every corner of California.

Particular emphasis is being placed on the San Joaquin Valley, the state’s major citrus growing region. The southern end of the valley is only 90 miles north of Los Angeles and is separated from the urban area by the Tehachapi Mountains.

“If it (the psyllid) gets over the hill, we’ve got to find it fast,” Batkin said.

California is not alone in searching for a solution to the psyllid-carried disease. Several laboratories in Florida, along with Texas A&M University, are conducting research along with University of California researchers at several locations, Batkin said.

“We don’t have the magic bullet yet, but we’re looking,” he said.