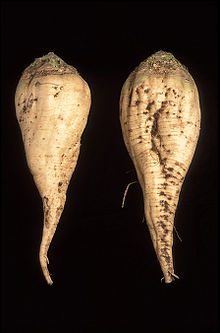 FIVE POINTS, Calif. (AP) — Amid the vast almond orchards and grape fields that surround Five Points in California’s Central Valley, a once-dominant crop that has nearly disappeared from the state’s farms is making a comeback: sugar beets.

But these beets won’t be processed into sugar. A dozen farmers, supported by university experts and a $5 million state grant, are set to start construction of a Fresno County demonstration plant that will convert the beets into ethanol.

If the demo project in Five Points succeeds, the farmers will build the nation’s first commercial-scale bio-refinery in nearby Mendota to turn beets into biofuel. Europe already has more than a dozen such plants, but most ethanol in the U.S. is made from corn.

California energy officials say the beet plant is an example of expanding state investment in biofuel production and an innovative way to achieve the state’s goal of increasing alternative fuel use over the next decade.

“We’re trying to reduce greenhouse gas emissions and to shift our transportation fuels to a lower carbon content,” said Robert Weisenmiller, chair of the California Energy Commission, which awarded the grant. “The beets have the potential to provide that.”

The farmers say so-called energy beets can deliver ethanol yields more than twice those of corn per acre. That’s because beets have a higher sugar content per ton than corn. And, the farmers say, the bio-refinery would bring jobs and investment to an area that’s dealing with water pumping restrictions and overly salty soils.

“This project is about rural development. It’s about bringing a better tax base to this area and bringing jobs for the people,” said John Diener, a grower who farms about 5,000 acres of diverse crops in Five Points and whose ranch will house the demonstration plant.

Driven by a federal mandate to reduce dependence on foreign oil, America’s ethanol industry has boomed over the past decade. Plants in 28 states now produce more than 13 billion gallons of ethanol each year, according to Geoff Cooper, vice president for research and analysis for the Renewable Fuels Association. Today, nearly all the gasoline sold in the U.S. contains the biofuel, generally at the 10 percent level.

About 95 percent of U.S. ethanol is made from corn, Cooper said. But that percentage could soon change because the Renewable Fuel Standard, established by Congress in 2005 and later expanded, caps the amount of ethanol produced from corn at 15 billion gallons.

Dozens of non-corn ethanol plants are now being developed and constructed throughout the country, experts say. Other California projects involve producing biofuels from food processing wastes, remains from field crops and manure from the dairy and poultry industries. Across the U.S., plants are looking at converting wheat straw, municipal waste and wood pulp into biofuel.

In central California, the bio-refinery would resurrect a crop that has nearly vanished. The birthplace of the sugar beet industry, California once grew over 330,000 acres of the gnarly root vegetable, with 11 sugar mills processing the beets. But as sugar prices collapsed, the mills shut down. Only one remains in the Imperial Valley.

When the last local mill in Mendota closed in 2008, farmers formed a cooperative and tried — unsuccessfully — to buy it back.

“We were left with a choice: Are we going to build our own sugar mill, which is expensive, or come up with something else?” said William Pucheu, a farmer from Tranquility who is part of the cooperative.

The farmers flew twice to Europe to tour beet-based biofuel facilities. This month, Mendota Bioenergy LLC — the company formed by the cooperative — received a grant to build the demo plant, which will turn about 250 acres of beets into 285,000 gallons of ethanol per year.

If it’s successful, a commercial bio-refinery would be built in Mendota, capable of producing 40 million gallons of ethanol annually. The bio-refinery, to debut in 2016, would put a total of about 80 beet growers and 35,000 acres back into production.

Both the demo plant and the commercial plant would run year-round and use beets grown by local farmers. The plants will also burn almond prunings and other wood waste to generate electricity for internal use and will convert some of those prunings into ethanol. They will process waste pulp from the beets to produce biomethane for compressed natural gas, and will produce fertilizer and recycle water for irrigation.

To area farmers, the beets are an ideal crop: they grow in poor and salty soils, and can use lesser-quality water, said Frank DelTesta, a third generation farmer who used to grow 150 acres of beets in Tranquility and is now growing some for the demo plant.

“Everybody liked growing beets, because they grew well here,” DelTesta said. “My family has been growing beets for generations and not having that crop in our rotation has affected the yields for other crops like cotton.”

And it’s not just farmers who would benefit, said project manager Jim Tischer. The group’s projections show the bio-refinery would create about 100 long-term jobs, as well as 150 seasonal agricultural jobs. It would lead to millions of dollars of local economic activity and generate taxes — a boon to Mendota, Tischer said, a town of 11,000 with one of the highest unemployment rates in the state.

The beet project comes at a time when the Midwest drought has reduced corn’s availability, leading nearly three dozen corn ethanol plants to halt production. At the same time, there are plenty of stockpiles of ethanol, experts say, because Americans are driving less and buying more fuel-efficient cars.

But the beet farmers say they aren’t worried, because ethanol is cheaper than regular gasoline.

“As times goes by, customers will start buying more of it,” Diener said, “because at the end of the day, it’s a cost saving deal and others are motivated by the ethics of the green energy business.”