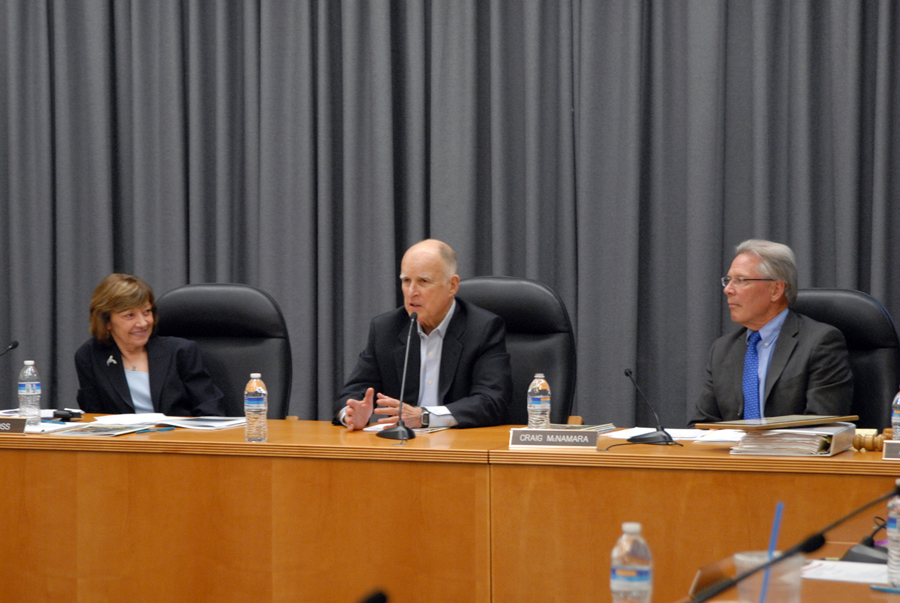 Governor Brown speaks at the California State Board of Food and Agriculture meeting at CDFA headquarters, as board president Craig McNamara and CDFA secretary Karen Ross look on.

Governor Edmund G. Brown Jr. stopped by this week at the monthly meeting of the California State Board of Agriculture, at CDFA headquarters. The board is comprised of gubernatorial appointees. The governor pointed out that he last attended a state board meeting during his first time in office roughly 35 years ago. He also expressed his appreciation for the work carried out by the board and stated his optimism about agriculture. “It’s obvious that agriculture is a big part of California’s future,” he said.

Governor Brown was introduced by former CDFA director Richard Rominger, who served during the governor’s previous terms, and current State Board president Craig McNamara, who thanked the governor for being a strong supporter of agriculture for many years.

CDFA secretary Karen Ross is accompanying Governor Brown next week on a trade mission to China. “We are the gateway to the whole Pacific,” the governor said. “And that’s the message I’ll take to China.”

This entry was posted in AG Vision, Agricultural Marketing, State Board of Food and Agriculture, Trade, Uncategorized and tagged China, Governor Brown. Bookmark the permalink.