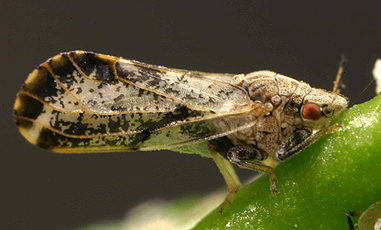 The Asian citrus psyllid, an invasive species that threatens California.

The U.S. Department of Agriculture’s (USDA) Animal and Plant Health Inspection Service (APHIS) today proclaimed April as “Invasive Plant Pest and Disease Awareness Month.” All month, APHIS will highlight how invasive species can enter the United States and spread, and how the general public can take simple, specific actions to leave these hungry pests behind. Invasive pests and diseases are non-native species that cause – or are likely to cause – harm to the economy, the environment or human health.

“At its core, APHIS’ mission is protecting animal and plant health in the United States,” said Acting APHIS Administrator Kevin Shea. “This includes programs to address the invasive pests and diseases that have cost the United States billions of dollars in lost agricultural jobs, closed export markets and damaged ecosystems. It’s a huge job, and APHIS needs the help of the public to be successful.”

Devastating invasive pests and diseases – insects, disease-causing microorganisms, snails, slugs, mites, microscopic worms, weed seeds and fungal spores – often hitch rides on things people move and pack. These common pathways include passenger baggage; plants and plant parts like fruit, vegetables and bud wood; Internet-purchased plants and plant products; firewood; and outdoor gear, among many others. Fortunately, once people are aware of these risks, they can easily prevent the spread of hungry pests.

Visit the Hungry Pests website, which is available in English and Spanish, at www.HungryPests.com to view an interactive map and learn about invasive pests and diseases that are affecting or could affect individual states, and how to report them. The website’s “What You Can Do” section offers the public “Seven Ways to Leave Hungry Pests Behind.” Also, by using Facebook and Twitter links, visitors can engage on the invasive pest issue on social media.

APHIS safeguards U.S. agricultural and natural resources from risks associated with the entry, establishment or spread of agricultural pests and diseases, as well as invasive and harmful weeds. In this battle, the agency works very closely with its many partners at the federal, state, county and local levels, and at universities and nongovernmental organizations. APHIS has had many successes combatting invasive plant pests and diseases, including the eradication of the Asian longhorned beetle in Illinois, New Jersey and Islip, New York; numerous exotic fruit fly outbreaks in Florida, Texas and California; the wheat disease Karnal bunt in Texas and California; plum pox virus in Pennsylvania and Michigan; the boll weevil from all 17 cotton-producing states with the exception of Texas’ Lower Rio Grande Valley; and Khapra beetle infestations in a number of states. APHIS is also closing in on the eradication of the European grapevine moth in California.

With Agriculture Secretary Vilsack’s leadership, APHIS works tirelessly to create and sustain opportunities for America’s farmers, ranchers and producers. Each day, APHIS promotes U.S. agricultural health, regulates genetically engineered organisms, administers the Animal Welfare Act, and carries out wildlife damage management activities, all to help safeguard the nation’s agriculture, fishing and forestry industries. In the event that a pest or disease of concern is detected, APHIS implements emergency protocols and partners with affected states and other countries to quickly manage or eradicate the outbreak. To promote the health of U.S. agriculture in the international trade arena, APHIS develops and advances science-based standards with trading partners to ensure America’s agricultural exports, valued at more than $137 billion annually, are protected from unjustified restrictions.