Posted on September 25, 2013 by Office of Public Affairs 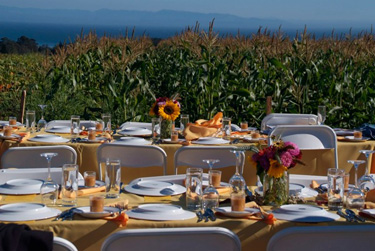 HUDSON, N.Y. — When a fledgling magazine gets former President Bill Clinton to contribute an article, you would think he would be featured on the cover. But the cover model for the current issue of the quarterly Modern Farmer is a sleepy-looking goat. Mr. Clinton is mentioned between articles on outer space farming and soil cuisine.

The magazine, which offers advice on building a corn maze and articles on the effect of climate change on lettuce and oysters, is trying to carve out a new niche on the newsstand. It edges into the food magazine sphere with luminous photography of vegetables, while articles report on straight agricultural topics more often found in farming publications like the 111-year-old Successful Farming.

Modern Farmer, which began publication in April, is trying to benefit from the first signs of growth in the total number of farms since World War II and the farm-to-table food trend that has fueled growth for farmers’ markets and community-supported agriculture. That means the magazine has attracted readers who include an Amish farmer and vegetable supplier to Whole Foods, Brooklyn rooftop farmers harvesting kale and broccoli and myriad young farmers going back to the land.

“I know they’re trying to reach people like me and the kind of hobbyists and the people who are just kind of enamored with the idea of farming,” said Courtney Cowgill, a 33-year-old co-owner of the Prairie Heritage Farm near Power, Mont., who formerly wrote about agriculture and other topics for The Associated Press. To appeal to the person who wants to romanticize farming and the person who is knee deep in turkey droppings “is hard, and I think they’re balancing that,” she said.

It helps that Modern Farmer explores a subject on the minds of some of the world’s wealthiest people. Ann Marie Gardner, the founder and editor in chief, conceived the idea for a magazine in 2011 after she noticed that sources she interviewed for Monocle magazine seemed preoccupied by agricultural issues. In spring 2012, Ms. Gardner, who previously worked for The New York Times and Tatler magazine, started to pitch an idea to investors. Frank Giustra, the Canadian mining billionaire and former chairman of Lion’s Gate Entertainment, who had started to produce award-winning olive oil in Umbria, Italy, took an interest in Ms. Gardner’s project. By November, he gave her enough money (she would not divulge figures) to start a Web site, and a print magazine.

“He was very interested in food investments,” Ms. Gardner said as she sat in her sun-dappled second-floor offices beneath a Pilates studio and above the Face Shop, which sells skin care products, along Hudson’s main strip. “It sat between his media interests and investments and his newfound food investments.”

The magazine has also attracted surprising financial support from advertisers eager to sell trucks, tractors, organic wine and work clothes to these young farmers. Sean O’Brien, global director of footwear for the Original Muck Boot Company, based in Smithfield, R.I., has advertised in both Modern Farmer issues.

“It’s really targeted almost a new consumer group for us,” Mr. O’Brien said. “We sell a lot of boots to farmers and workers and outdoorsmen. You can look at a Modern Farmer as almost a hobby farmer. This a perfect vehicle to target that key consumer group.”

Ms. Gardner has been quick to nurture her powerful supporters on the editorial and business sides. She asked Mr. Giustra to let one of her reporters travel with him and Mr. Clinton, whose foundation has benefited from Mr. Giustra’s friendship and largess, when they visited Peru and Colombia in May. He declined, but instead she was able to arrange for the former president to contribute an article. He wrote about the work his foundation has been doing with farmers globally, like helping fisherman along Colombia’s coast get their fish into restaurants. Mr. Clinton also offered his own recollections of helping his Uncle Buddy tend his farm plot in Arkansas.

“As a young boy, I picked beans, corn and tomatoes, poured tubs of water into sandy soil to grow large watermelons, fed animals and badly lost a head-butting contest to a ram,” wrote Mr. Clinton, whose foundation staff worked with Ms. Gardner on the article.

The magazine has attracted a global following with the first print edition being sold in Britain, Germany and Australia as well as in the United States, according to Modern Farmer’s spokeswoman, Jessie Cohen. Traffic on the Web site, which went live in April, grew to 99,000 unique visitors in the United States in July, according to comScore. The first print issue sold 35,000 copies on newsstands and 13,000 by subscription.

Modern Farmer joins a surprisingly robust genre of farming magazines. The Alliance for Audited Media tracks 20 farming magazines in the United States and Canada and their circulation in the last three years has held strong. Scott Mortimer, publisher and general manager at Meredith Corporation, which includes Successful Farming, notes that grain prices are rising, land prices are at historical highs and the technology to produce crops has improved.

Ms. Gardner may find that some of her biggest critics are not battle-hardened media types, but farmers. Allan Van Tassel, an 83-year-old lifelong farmer who is Ms. Gardner’s neighbor, tells her regularly that the magazine does not have a chance of survival.

“It’s a nice idea,” Mr. Van Tassel said. “But as I say, you drive up and down the road and you see these small conglomerates where they’re going to raise things one year, two years. Then they’re gone.”

Ms. Gardner does not discredit the perils of either publishing or farming. While Modern Farmer slowly and steadily progressed last year, a windstorm wiped out her entire crop of pears. This year, as she has logged long hours making Modern Farmer grow, her own garden has become overgrown. Eventually, she placed her trust in a professional.

“I brought in a farmer to help me,” Ms. Gardner said.