Urban beekeeping promoted in Los Angeles – from the California Report

Posted on October 22, 2013 by Office of Public Affairs 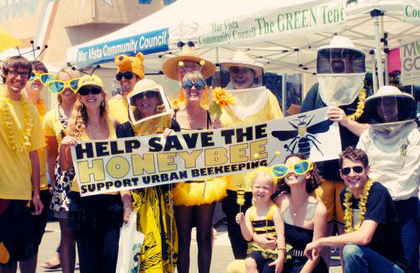 Deep in a sunny backyard in Los Angeles’ Silver Lake district, a colony of 50,000 Western honeybees is getting oriented to its new surroundings. Yesterday, the swarm was living under the eaves of a house in Whittier, some 20 miles away. But they’re here today because Walker Rollins and Kirk Anderson took the time to remove them — humanely.

Anderson and Rollins are members of a club called Backwards Beekeepers, which relocates bee swarms and colonies in L.A. several times a week. Yet in doing so, they’re breaking the law, because beekeeping here is illegal, and the city’s most common tactic in dealing with feral bees is to exterminate them.

Anderson says most people with a bad opinion about feral bees have barely any experience working with them. “Bees are like people,” he said. “Everybody has a bad day. If a beehive has a bad day, people want to have it destroyed. If a person has a bad day, they put them on Oprah.”

But many Angelenos are frightened of bees, and might be uneasy with the thought of 50,000 of them living next door. Ron Lorenzen, an urban forestry manager for the city, says that while he wouldn’t oppose a law allowing beekeeping in residential areas, his own agency’s rationale for eradicating bees on public property is based on evidence of a dangerous new hybrid.

“I’m not a bee professional, but a pest control adviser [in our office] said that 80 percent of the hives they’re finding are actually Africanized colonies. Evidently the bees are becoming more homogenous.”

Africanized bee colonies have been associated with the “killer” bees that have recently attacked people and animals, causing some fatalities. Western honeybees are considered less aggressive.

“All bees are defensive,” he explained. “There’s always been mean bees, and they can be mean for different reasons. By understanding them, you can do things so you don’t trigger their meanness or their defensive actions.”

Across the city, Rob and Chelsea McFarland run a nonprofit called Honey Love. After piloting feasibility studies and launching petitions, the McFarlands have begun lobbying the city’s 95 neighborhood councils to make beekeeping legal in L.A.

“We go on right after the ordinances for much heavier topics like gangs and drugs,” Chelsea said. “We go up and we’re like, ‘Yay bees!’ and they’re like, ‘You guys are the most delightful ordinance we’ve ever had to vote on.’”

These guerrilla beekeepers believe that cities, with their diverse vegetation and lack of agricultural pesticides, are the bees’ best bet for countering colony collapse disorder (CCD), and that legalizing bees in L.A. would be a big win for everybody. (CCD is a phenomenon where honeybees abandon their hives; it has been on the increase in recent years and is significant economically because many crops worldwide are pollinated by honeybees.)

Rob McFarland says that encouraging people to keep honeybees in cities makes them safer from factors that are endangering the insects commercially.

Rob and Chelsea McFarland have the support of 11th District city council member Mike Bonin. His proposal — allowing beekeeping in single-family neighborhoods — is moving through the Planning Commission and could be up for a vote in as few as five months.

“Currently, we allow single-family homes to do truck gardening — growing berries, flowers, fruits, herbs, mushrooms and nuts for private use or for sale at farmers’ markets,” Bonin explained. “This proposal would afford the same opportunity for beekeeping.”

Beekeeping is legal in San Francisco, San Jose and Sacramento. Russell Bates, who founded Backwards Beekeepers with his wife, Amy Seidenwurm, and Kirk Anderson, says interest in beekeeping is rising all over California, especially in urban areas where people are passionate about local agriculture and sustainability.

“We’ve seen it on the rise in Arcata and Berkeley and Oakland,” he said. “It bubbles up wherever people are curious about how to be more in tune with nature.”

Officials estimate there are 10 colonies of feral bees in every square mile of L.A. With support for the new law beginning to swarm, the state’s biggest city could be bee-friendly by this time next year.