Cattle theft increasing in California – from the Sacramento Bee

Posted on October 28, 2013 by Office of Public Affairs 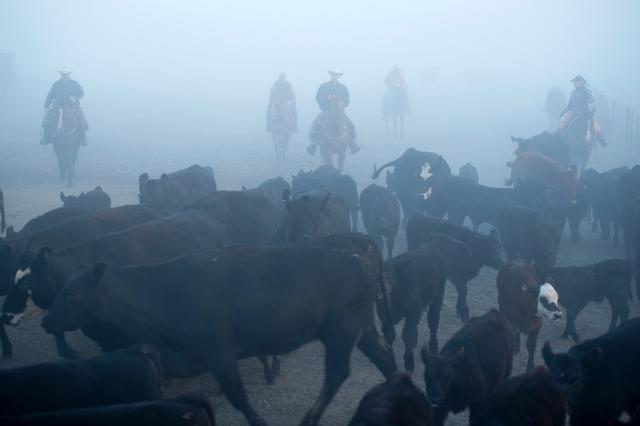 The effects of cattle theft did not fully dawn on rancher Candace Owen until she got a call in 2010 from a fellow rancher. It was a heads-up alerting her that some of her cows were missing their calves.

The clue that something was amiss was each cow was “tight bagged,” the term ranchers use to describe cows with sagging udders that have not been milked.

Owen soon discovered that as many as 25 calves had been taken from her ranch in Red Bluff. She had been hit by cattle rustlers, characters that for most people exist only in history books and cowboy movies.

Cattle rustling, it turns out, has never gone away. And it’s on the rise in California and nationwide.

“It’s a terrible crime when you steal someone’s livelihood,” said Owen, whose husband’s family has been ranching in and around Tehama County for generations.

Last year, 1,317 head of cattle were reported stolen or missing in California, said Greg Lawley, chief of the state’s Bureau of Livestock Identification. That’s a 22 percent increase from what was reported before the recession.

“We assume this is an outgrowth of cattle price rise,” Lawley said.

In many instances a cow can sell easily for $1,000. Cattle prices have been increasing steadily, with prices hitting record highs in 2011 and 2012, according to the USDA’s National Agricultural Statistics Service.

“The thing with stealing livestock, and especially cattle, is you can get 100 percent of its value, especially with unbranded animals,” Lawley said. In most cases a brand is the only way to establish ownership.

Unlike the old days, when stolen cattle were herded on horseback, today’s rustlers use trailers and trucks. “The speed of transport means you can load up a gooseneck trailer full of cattle and be in Colorado 24 hours later,” Lawley said.

In Owen’s case, an investigation by the Bureau of Livestock Identification concluded that the thieves gathered at night and herded the calves by horseback. Both cows and calves were herded into trailers. They separated the calves from the cows and dumped the cows at different places in the countryside.

Owen said losing calves deepens her loss because of all the future productivity lost. “It’s a long-term loss,” she said.

Owen has since had some of the stolen cattle returned. A witness identified the likely suspect in that theft, but there was not enough evidence to prosecute, Owen said.

In cattle ranching, it is well known that cattle theft is, typically, an inside job, said John Suther, senior investigator with the Bureau of Livestock Identification.

“They’re neighbors. They’re employees – hired men.” said Suther. “It’s a specialized business so people with knowledge of the cattle industry are the ones stealing these animals,” he said.

Suther has the herculean task of being the only cattle theft investigator for the whole state. He has to travel thousands of miles from his home in Shasta County to do his job. The state has roughly 3 million head of cattle. Of those, about 575,000 cows are beef or range cattle, and the rest are dairy cows. Suther mainly investigates the former, since dairy cow theft is relatively rare.

Although he is does not carry a firearm, Suther has the right to pull over and inspect vehicles used in transporting cattle. A lot of what he does is brand inspections. The bureau registers 11,000 brands every year.

Last year, the bureau, returned 1,604 cattle to ranchers. The value recovered was $1.4 million.

Suther said cattle theft tends to migrate from hot spot to hot spot. This year, there seems to be a lot of theft activity in the Central Valley, Suther said.

The cattle theft problem is likely larger than people think it is, Suther said. “We feel cattle theft is completely under-reported.”

Suther said that many ranchers hesitate to report cattle stolen because they do not want to be targeted again. Other ranchers believe there is a stigma attached to being a victim of theft. Many simply assume they will lose 2 percent of their cattle and won’t investigate until unless the number of stolen cattle is quite large, he said.

The rise in cattle theft in California is part of a national trend. In 2012, more than 10,400 head of cattle and horses were reported missing or stolen to the Texas and Southwestern Cattle Raisers Association – a 36 percent increase from 2010.

Central Valley cattle rancher Mark Beck has had four steers stolen this year from his ranches in Sacramento, San Joaquin and Calaveras counties. “The thieves loaded them by roadways where there is easy access,” he said. “Sometimes they shoot the cattle and butcher them where they find them.”

Beck sees it as a crime driven by economics. “The way the job market has been since 2008, people are getting desperate, and they’re stealing things,” Beck said.

Cattle theft is hard to prosecute, and when thieves are caught and brought to trial, they usually avoid paying large fines or serving much jail time.

However, that may change with Gov. Jerry Brown’s recent signing of Assembly Bill 924, which sets potential fines for stealing cattle.

The new law is music to the ears of cattle ranchers, said Justin Oldfield, vice president of government relations with the California Cattlemen’s Association. The association is the major lobbying arm of the state’s cattle ranchers and was a big proponent of the bill.

“From a judicial perspective, we’ve been disheartened over the last few years,” said Oldfield.

He said it is common for thieves, when caught, to plead guilty to stealing 10 cattle – which brings a felony charge – and plead down the charge down to a misdemeanor. “They’ll get probation,” said Oldfield. “When people are punished, it’s usually a fine and not jail time. There doesn’t seem to be a whole lot of seriousness from the courts.”

The new law, which takes effect Jan. 1, makes cattle theft punishable as a felony or misdemeanor and calls for fines up to $5,000. Previously, there was no set level of fines for cattle rustling; it was up to the judge’s discretion, and fines were rarely levied. The new law also requires fines to be paid to the Bureau of Livestock Identification instead of the state’s general fund.

Oldfield is uncertain whether the new law will deter cattle theft, but he believes that it will create awareness and is a step in the right direction.

“When you’re talking about the value of a steer worth $1,000 or more, and you lose five of those – that’s a substantial impact to an operation,” he said. “It can make or break the bottom line for that year.”