Posted on November 15, 2013 by Office of Public Affairs 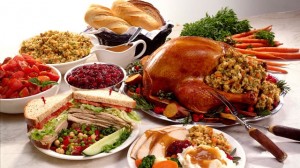 The American Farm Bureau Federation’s 28th annual informal price survey of classic items found on the Thanksgiving Day dinner table indicates the average cost of this year’s feast for 10 is $49.04, a 44-cent price decrease from last year’s average of $49.48.

“The cost of this year’s meal, at less than $5 per serving, remains an excellent value for consumers,” said AFBF President Bob Stallman, a rice and cattle producer from Texas. “America’s farm and ranch families are honored to produce the food from our nation’s land for family Thanksgiving celebrations,” he said. “During this holiday season, many farmers and ranchers will be reaching out to consumers in-person or through social media, to answer questions about the food that they grow or the poultry and livestock they raise,” he added.

The big ticket item – a 16-pound turkey – came in at $21.76 this year. That was roughly $1.36 per pound, a decrease of about 3 cents per pound, or a total of 47 cents per whole turkey, compared to 2012. The whole bird was the biggest contributor to the final total, showing the largest price decrease compared to last year.

This year we can be thankful that Thanksgiving Dinner, a special meal many of us look forward to all year, will not take a bigger bite out of our wallets,” said John Anderson, AFBF’s deputy chief economist. “Most Americans will pay about the same as last year at the grocery store for a turkey and all the trimmings. Slightly higher turkey production for much of the year coupled with an increase in birds in cold storage may be responsible for the moderate price decrease our shoppers reported,” he said.

Strategic shoppers may pay even less for frozen tom turkey compared to AFBF’s 167 volunteer shoppers who checked prices at grocery stores in 34 states.

“Special sales and promotions on turkey and other holiday food items will continue right up to Thanksgiving,” Anderson explained. “If you have the patience to wait until the last minute to buy a turkey you might come home with an exceptional bargain,” he said.

Items that showed a moderate price increase from last year included three pounds of sweet potatoes, $3.36; one gallon of whole milk, $3.66; and a 30-ounce can of pumpkin pie mix, $3.10.

In addition, a combined group of miscellaneous items, including coffee and ingredients necessary to prepare the meal (onions, eggs, sugar, flour, evaporated milk and butter) increased to $3.20. A one-pound relish tray of carrots and celery increased to 81 cents.

The average cost of the dinner has remained around $49 since 2011. Further, Anderson noted that despite retail price increases during the last year or so, American consumers have enjoyed relatively stable food costs in general over the years, particularly when adjusted for inflation.

The stable average price reported this year by Farm Bureau for a classic Thanksgiving dinner tracks closely with the government’s Consumer Price Index for food eaten at home (available online at http://www.bls.gov/news.release/pdf/cpi.pdf), which indicates a 1 percent increase compared to a year ago.

Farm Bureau volunteer shoppers are asked to look for the best possible prices, without taking advantage of special promotional coupons or purchase deals, such as spending $50 and receiving a free turkey. Shoppers with an eye for bargains in all areas of the country should be able to purchase individual menu items at prices comparable to the Farm Bureau survey averages. Another option for busy families without a lot of time to cook is ready-to-eat Thanksgiving meals for up to 10 people, with all the trimmings, which are available at many supermarkets and take-out restaurants for around $50 to $75.

The AFBF survey was first conducted in 1986. While Farm Bureau does not make any scientific claims about the data, it is an informal gauge of price trends around the nation. Farm Bureau’s survey menu has remained unchanged since 1986 to allow for consistent price comparisons.