Giving so much more than thanks 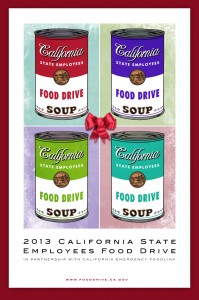 Thanksgiving is a uniquely American invention, and I think it must be one of our finest. The celebrations, the food, the parades and pronouncements give us an annual reminder of all that we are so thankful for – and also a reminder to share our blessings.

One benefit of my position as California’s Secretary of Agriculture is that my department coordinates the annual State Employees Food Drive, which last year donated 647,110 pounds of food to our partner, California Emergency Foodlink. Following the example of our state’s farmers and ranchers who provide so much of our nation’s and indeed our world’s food, state workers created this program back in 1975 – during Governor Jerry Brown’s first term. Since then, it has steadily grown from a fledgling collection of canned goods to a key component of our food banks’ annual plans.

2013 marked the passing of the food drive’s first statewide coordinator, Myron Curtis, who worked at the Department of General Services but found his real calling as the state workforce’s unofficial Santa Claus. Mr. Curtis leaves a legacy of generosity and joviality that inspired our state employees to support, expand and sustain the annual food drive. Here’s a quote from the DGS Winter 1980-81 newsletter: “Mr. Curtis’ efforts in the program cannot be overstated. He is the driving force behind the success of the food drive, and a concerned and compassionate member of his community.” (There’s also a nice photo of Mr. Curtis in the Nov.-Dec. 1981 issue, top right.) He sincerely enjoyed this annual effort, and he helped his coworkers see how much good they could all do together. He took pride in setting new records year after year – but as the numbers grew, Mr. Curtis always remained connected to why he was doing this important work. As he told his colleagues, “In many cases, the food you and I contribute has been, or will be, the only ‘holiday’ many people may have.”

I recently dedicated this year’s State Employees Food Drive to the memory of Mr. Myron Curtis. As you gather to give thanks, I encourage you to reflect on the people in your life who bring out the best in those around them – and I ask you humbly, as Myron Curtis did each year, to give as you are able.