Posted on November 22, 2013 by Office of Public Affairs 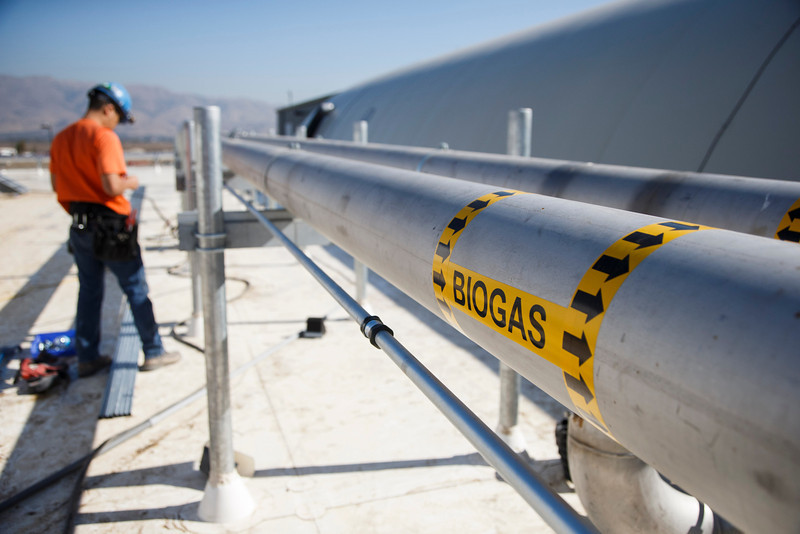 The nation’s largest facility for turning food scraps into biogas is about to go online in north San Jose.

The project is a unique partnership between GreenWaste, which collects garbage, recycled materials and compostibles, and Zanker Road Resource Management, which operates recycling facilities. The two firms formed the Zero Waste Energy Development Company in 2011 to take organic recycling to the next level: extracting energy.

Food waste, largely from restaurants and commercial businesses across San Jose, will be processed at the Los Esteros Road location by 16 massive digestion chambers that each can hold 350 tons of waste.

The process takes roughly 21 days, during which the food breaks down into compost and methane biogas. The gas can then be converted into electricity to power the facility or for use as fuel elsewhere. The technology, known as “dry fermentation anaerobic digestion,” uses bacteria to break down organic matter in an oxygen-free environment and without using large quantities of water.

Scheduled to open later this month, the new facility arrives as California works to divert more materials — from garbage to food scraps to consumer electronics — away from landfills.

“This project is a big milestone for us,” said Jo Zientek, the City of San Jose’s Deputy Director of Environmental Services. “It’s built on a piece of property that’s an old landfill site that’s owned by the city already. And the project is a direct outgrowth of San Jose’s Green Vision.”

San Jose adopted its Green Vision agenda in 2007 with the goal of making the city a world center of clean technology innovation. Included in the plan is an effort to divert 100 percent of waste from landfills and convert waste to energy.

Organic waste such as yard trimmings and leftover food are typically buried in land fills. As the waste breaks down, the landfills often emit methane gas — a potent greenhouse gas that contributes to smog and climate change. Municipal solid waste landfills are one of the largest sources of human-related methane emissions in the United States, according to the EPA, and represent a lost opportunity to capture a significant source of energy.

“The capture rate at most landfills is not efficient,” said Eric Herbert, CEO of Zero Waste Energy, which is based in Lafayette. “Methane is 23 times more potent than carbon dioxide.”

Zero Waste’s anaerobic digestion facility, located near the southern tip of the San Francisco Bay, will be the first large-scale commercial operation of its kind in the United States. It’s being developed in three phases over the next several years, with each phase capable of processing 90,000 tons of organic waste each year. When fully operational, it will be one of the largest such plants in the world.

California utilities, including PG&E, are required to buy 33 percent of their electricity from renewable sources by 2020 via the state’s “Renewable Portfolio Standard.” Though much attention has focused on solar and wind power, electricity generated from biogas also qualifies for meeting the standard. So San Jose’s new facility could be replicated throughout the state by cities struggling to figure out how to handle their waste.

Other biogas projects are already operating in the Bay Area. Waste Management Inc., which recycles waste for several cities in Alameda County, is turning its decomposing garbage at the Altamont Landfill near Livermore into electricity and liquefied natural gas. The fuel is then used in the company’s garbage trucks.

“The interest in biogas is growing very quickly,” said Julia Levin, executive director of the recently formed Bioenergy Association of California. “In the long run, there’s a lot of potential for biogas to be used as transportation fuel. San Jose is on the cutting edge, but cities across California are trying to figure out how to better handle their waste. Biogas closes the sustainability loop on so many levels.”