Could California freeze be a good thing in Asian citrus psyllid fight? From Western Farm Press

Posted on December 11, 2013 by Office of Public Affairs 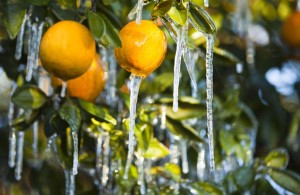 Could the recent cold snap in California’s San Joaquin Valley have been just what the doctor ordered for citrus industry officials worried about discoveries of the Asian citrus psyllid? Only time will tell.

A study published in the Journal of Insect Science,conducted by David G. Hall, Erik J. Wenninger, and Matthew G. Hentz, sought to determine how cold is too cold for the tiny disease-vectoring pest. Hall and Hentz are with the USDA-ARS in Fort Pierce, Fla., and Wenninger from the University of Idaho, Twin Falls Research and Extension Center.

Results of the studies suggest that temperatures similar to what was seen in the current freeze event in the San Joaquin Valley could have a lethal effect on the ACP. The scientific studies showed psyllid mortality after adults were subjected to temperatures of -4.5C (23.9F) or colder for several hours.

Temperatures of 17 degrees for as little as two hours in the controlled studies showed complete mortality of non-acclimated adult psyllids. It is important to note that these were targeted scientific research studies; citrus growers were doing everything in their power to increase orchard temperatures and avoid fruit damage.

Egg and nymph mortality studies were promising as well. One experiment subjected eggs and nymphs to temperatures ranging from the upper teens to low 20s Fahrenheit. Nymph mortality of near 95 percent was seen in as little as four hours at -8.2C (17.24F), to eight hours at -5.5C (22.1F).

While the study does indicate a hard freeze can have lethal impacts on the ACP – this is a good thing in the long-term – the resulting fruit damage in the short-term is obviously not good for growers. Still, the big question remains: have the small number of psyllids discovered in the San Joaquin Valley thus far been able to vector Huanglongbing in local commercial orchards? That answer won’t be known for several years.

Link to the article : http://westernfarmpress.com/blog/could-california-freeze-be-good-thing-acp-fight

NOTE – CDFA asks residents and growers in freeze areas to remain vigilant in their search for Asian citrus psyllids, as the studies mentioned were conducted in a greenhouse and conditions could be different than a field environment.

4 Responses to Could California freeze be a good thing in Asian citrus psyllid fight? From Western Farm Press