Cattle Ranching Critical to Environment, Even During Drought 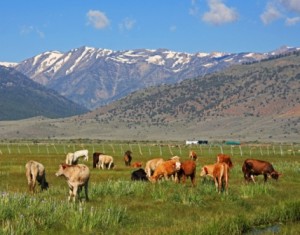 It is human nature to come at a crisis from one’s own point of view. Sometimes, however, that can lead to conclusions and courses of action that are ineffective at best and drastically short-sighted at worst. With the drought and its impact on agriculture in the news, I am taking this opportunity as a beef cattle rancher to provide insight into California’s cattle production, its value to our environment and our state’s economy, and what ranchers are doing to conserve water not only during this severe drought, but all the time.

First, let’s start with the water usage numbers. A lot of erroneous statistics have been tossed around that aren’t based in cited evidence. In reality, it takes 441 gallons of water to produce one pound of boneless beef—a fraction of the amount of water that is used to produce everyday items such as one cotton T-shirt. That 441 gallons of water includes the water the animals drink daily, water used to irrigate pasture land and grow crops cattle are fed, and the water used in processing the beef. Water conservation has long been a commitment of U.S. ranchers, and we have reduced the amount of water used to raise beef by 12 percent compared to 30 years ago. (Source: “The environmental impact of beef production in the United States: 1977 Compared with 2007,” J. L. Capper, Journal of Animal Science, 2011)

Secondly, cattle production has many positive aspects beyond providing food that benefit everyone. California ranchers—in fact, all ranchers—think about the environment daily. We understand that raising cattle requires careful use of resources with an eye toward both sustainability of the cattle operation and preservation of wildlife habitat. Contrary to what you might have heard, ALL beef cattle spend the majority of their lives eating grass on pastures. About 85 percent of U.S. rangeland is unsuitable for crop production, but it is suitable for grazing and for complementary wildlife habitat. This is particularly true for California, a state with more diversity in our rangeland than any other in the country. Some 60 to 70 percent of California’s endangered species such as the California tiger salamander and the California red-legged frog live on privately-owned rangeland. This rangeland also plays a critical role in California’s water supply. According to the California Department of Conservation, while California’s rangeland is about 25 percent of all land in California, about 85 percent of California’s drinking water is collected and stored within these rangeland watersheds. Ranchers actively support on-going watershed research to help them improve their land stewardship practices and protect the water quality leaving their ranches.

In addition to the interconnectedness of rangelands, water, and wildlife, farmers and ranchers have a huge impact on our state’s economy. According to the California Department of Food and Agriculture, there are 80,500 farms and ranches in California and agriculture is a $44.7 billion dollar industry generating at least $100 billion in related economic activity. Milk, cattle and calves are among the top five valued commodities for California agriculture. Most people don’t realize that across the United States, 97 percent of the cattle ranches are family-owned. These are individuals and families like mine that have been doing this work for generations, and who have been working to continually improve the sustainability of what they do. My grandchildren, for example are the seventh generation to live on the ranch in the East Bay.

California’s ranchers and farmers are caring for our animals during this stressful time, often at great financial risk to purchase hay and other carbohydrate feedstuffs like almond hulls. There is less rain water for the pastures, and some stock ponds and creeks have gone dry since there has not been rainwater runoff. Ranchers are using our compromised water and forage sources carefully.  In too many cases some need to sell some or all of their livestock to others who have both sufficient feed and water to take care of the animals. It hurts ranchers to lose their hard-earned enterprise and animal husbandry efforts for the year and, perhaps permanently. But it hurts even more when our neighbors regard us as perpetrators of the water problem and not a key component of California’s food supply and natural resources – affecting their own daily lives.

Karen Sweet is a cattle rancher in Livermore, CA.

This entry was posted in Environment and tagged Cattle, Drought. Bookmark the permalink.

2 Responses to Cattle Ranching Critical to Environment, Even During Drought