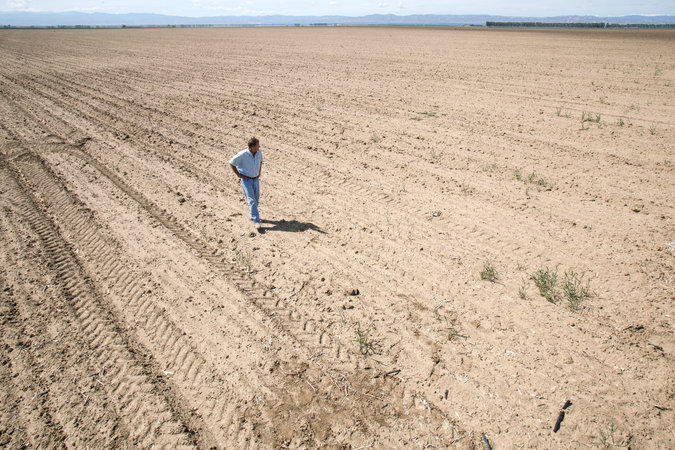 This summer, Todd Allen’s only crop will be Pima cotton. He and his brother, Joel, usually also grow cantaloupes and, later in the season, winter wheat on about 600 acres or so. But this year, they and hundreds of others will get no water from the reservoirs that sustain farming in the Central Valley, where much of the nation’s fresh fruits, nuts and vegetables are grown.Mr. Allen says he will give his cotton crop just “one shot of water when it gets to a certain height.” So they will forgo melons. And a question mark hangs over winter wheat.

Heading into the third year of a prolonged drought, the Allens are among the many California farmers forced to make dire choices that could leave as much as 800,000 acres, or about 7 percent of the state’s cropland, fallow. While some think that estimate may be inflated so early in the planting season, the consensus is that drier and drier seasons are on the horizon. A recent report on prospective planting from the federal Department of Agriculture forecast a 20 percent decline in California’s rice crop and a 35 percent decline in cotton this year from last year’s crop. The decisions by farmers like the Allens will translate directly into higher prices at the grocery store.

Anywhere between one-third and one-half of the nation’s fruits and vegetables are grown in California, meaning Americans are facing higher prices on melons, broccoli, baby greens, almonds and other popular crops.

And while this is not the state’s worst drought on record (that was in the 1920s), there are greater demands today on what water there is. A booming population and a sharp increase in lucrative crops like berries and nuts that require more water strain the system. In addition, environmental laws put into effect after the last major drought, in the 1970s, to protect fish and wildlife habitats have reduced the amount of water going to farmers.

“So while we may have more water than we did in other droughts, it has to stretch further,” said Jay Lund, an engineering professor specializing in water resources and environmental planning and management at the University of California, Davis. He said this drought will rank somewhere between the third- to the sixth-worst on record. Rain did arrive at the end of last month, brightening fields and pastures along the coast and in the Central Valley and adding a few inches to the state’s depleted reservoirs.

“It’s been good for vegetation and kept the dust down, but it’s not enough to have a serious impact on our overall situation,” said Robert Roach, assistant commissioner of agriculture in Monterey County.

Farmers rely on a variety of sources depending on the location of their fields. In the Central Valley, most farmers contract to receive a specified amount of water from either the federal Central Valley Project or the State Water Project. But in drought years like this one, they may not receive a full allotment or even any water at all.

The state has already pledged $687 million to address the drought, with the federal government committing an additional $200 million. But much of that money will be used to improve the infrastructure for water collection and distribution — it cannot make rain. And on April 1, state and federal water and environmental officials announced that they would start pumping to capture some of the rain that had fallen recently in reservoirs, an attempt to respond to widespread criticism that environmental regulations aimed at protecting habitats and fish like salmon and smelt were allowing water to flow into the Pacific.

But officials said any captured water would most likely be put in storage in anticipation of a dry 2015. “Those that have a zero allocation applied to them right now, even if we have an improvement in the hydrology here in the near future, we don’t see that those numbers would go off zero,” said David Murillo, regional director of the United States Bureau of Reclamation.

Tensions have been high over the water allocations to farmers, with signs reading “Congress created this dust bowl” and “Politicians are responsible for the drought” lining Interstate 5 through the heart of the Central Valley.

“The fish are more important than our farms,” said Stephen F. Patricio, president of Westside Produce, which processes and markets melons.

The scarcity of water is driving up the price week to week. One grower who sold extra water for $1,500 an acre-foot about a month ago was offered $2,500 more recently. (An acre-foot is the amount it takes to cover one acre of ground a foot deep in water, or 325,851 gallons). “This sort of thing is causing some hard feelings because some of the families that have farmed here forever can’t afford to buy water while investors without any real ties to the land are driving up the price,” Mr. Patricio said.

Several insurance and pension funds have snapped up land in the Central and Pajaro Valleys and replaced traditional crops like spinach, melons and asparagus with ones requiring more water, like avocados, nuts and berries, which command premium prices thanks to soaring demand from baby boomers and the international market. The region produces twice as many almonds, roughly two billion pounds, as it did in 2006.

The boom in nut trees, water managers in the valleys say, has strained the state’s water resources even further. Brian Lockwood, senior hydrologist at the Pajaro Valley Water Management Agency, pointed to the strawberry fields that have largely displaced the apple orchards that used to be major producers in the Pajaro Valley.

“Apples need about a half acre-foot of water per acre, whereas strawberries take two or more acre-feet,” Mr. Lockwood said. “You can’t blame growers for seeking better-paying crops, but it has quadrupled water use per acreThus, strawberry farmers like Miguel Ramos are working to use water “reclaimed” from municipal waste water for their plants, which are just beginning to produce fruit. Mr. Ramos also is experimenting with growing strawberry plants in a medium derived from coconut fiber, which requires much less water.

Nut farmers defend their use of water, pointing out that they have a decades-long investment. “I am not a water hog,” said Ron Fisher, founder and chief executive of the Fisher Nut Company in Modesto, one of the 10 largest nut businesses in the country.

He will get three-quarters of his normal allotment from a water district, plus more from a contract he bought four years ago. “I lost money on it in the first two years, but last year and this year, it’s paying off,” Mr. Fisher said.He also has wells on the 1,000 acres of almond trees he owns. The company also processes and markets nuts from other growers. The well water, however, is higher in sodium and boron than is ideal. The trees “will tolerate it, but we may see some stunting and reduction in productivity,” he said.

Applications to drill new, deeper wells have increased tremendously, according to water district managers. But wells, which can cost from $500,000 to $1 million to drill, are only a stopgap measure, as Greg Beccio, owner of Happy Boy Farms, an organic business, knows.Last year, he got a reduced allocation of water from the Chowchilla Water District, which supplies several parcels he farms, so he began relying more heavily on wells. One, however, ran dry, in part because his neighbors were punching deeper wells into the ground. A crop of butternut squash on 15 acres yielded only half what it should have, he said.

This year, he plans instead to plant some tomatoes, melons and other crops in the Pajaro, which is a little less dry.

But he will still rely heavily on his wells — which means higher expenses. “Each well has its own P.G. & E. bill, remember,” Rod Braga, chief executive of Braga Fresh Family Farms, said, referring to Pacific Gas & Electric company.

Braga is a large grower of crops traditional to the Salinas Valley like celery, spinach, broccoli and iceberg lettuce, as well as things like chard, kale and beets. All of its water comes from wells that are fed by aquifers, which in turn are fed by two reservoirs that are county projects.