Outsmarting the Drought – from the Sacramento Bee 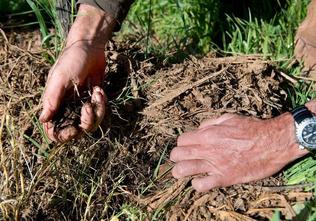 This unique mix of manure, compost and mulch at the base of a grape vine retains water for months – even through a drought. This Oregon House vineyard has been watered just twice in four years.
Credit – Randy Pench, Sacramento Bee.

Maybe shoppers will balk at, say, a $2.50 head of lettuce. Maybe we’ll put a stake in the heart of local food movements by filling in with cheaper produce from Florida, Texas and Mexico.

But what if you could grow food with less water or even no water?

If you want to outwit a drought, ask an Israeli.

Shahar Caspi tends acres of gardens, fruit trees and a commercial vineyard in the hamlet of Oregon House in the foothills between Marysville and Grass Valley. His job since 2012 has been raising food year round for his community and bringing perfect wine grapes to harvest – all without tilling, and with little to zero added water.

He’s done it before. On a dizzy ride across switchbacks and valley flats, in an area that rises and tumbles from 2,300 to 1,800 feet and back again over forested canyons and gentle slopes, Caspi gives me a tour. He has a distinctly Israeli flourish behind the wheel. When he talks to people in the back seat, he takes his eyes off the road to look at them, even as he navigates a hairpin turn.

He passes a grove of olive trees neglected for 10 years that produced no olives. But after a year on the Caspi method – the equivalent of Ensure for the earth – the trees delivered 40 pounds of olives.

Next we drove between two fields, one side brown, ragged and parched, the other a Caspi no-water showcase – grape vines in bud break, the ground beneath them rich, a natural ground cover green as jade. “Mulch with shredded roots,” he says exuberantly, eyes off the road. “Very simple!”

At a sunny glade, another concept preps cherry trees. He walks us past huge square holes he flushed with water and allowed to drain. The holes were filled with Caspi’s mulch, manure and compost, then a tree. “They won’t need water for many, many months.”

Back in the greenhouse next to his mountaintop home, Caspi laid manure on the rock-hard dirt floor, and on purpose didn’t till the soil underneath. He stuck chard seedlings directly into the manure. “They flourished immediately,” Caspi says. “The roots went sideways into a huge mass of roots. I’ve never seen anything like it.”

And despite no rainfall the first four months of his second season of raising food for his neighbors,water usage dropped 30 percent and yields increased.

How does he do it?

The same way a dietitian would bulk up a wasting patient with lots of calories and nutrients. Except Caspi is like a soil chef, mixing fermented manure and compost in varying proportions “to re-establish a whole layer of soil that holds water” like a subterranean sponge.

The technique is reminiscent of Rudolf Steiner’s bio-dynamics, which treats the farm as a holistic entity. But considering Caspi’s past and combining it with an uncertain future of water in California, a goal of using zero water to grow food is understandable.

Caspi grew up inculcated with respect for water. In Israel, kids get “Don’t Waste A Drop” stickers in school that go on the family fridge. “It’s so much in our blood to save water,” he says. “We had a cartoon that showed the whole family showering together under a few drops of water.”

Modern drip irrigation with emitters was an idea out of Israel. So is placing black plastic sheeting over soil to contain moisture. Israel leads the world in recycling 80 percent of its water. Its latest technology collects dew.

In California, some growers are on top of the drought. A report from the California Farm Water Coalition says that in the San Joaquin Valley, $2.2 billion was invested in drip irrigation on 1.8 million acres. But for every conserver using soil probes, infrared photography and improved weather forecasting, we have devourers of resources.

“Here you flood fields,” Caspi says. “An Israeli would say, ‘Are you kidding?’ It’s the mentality of abundance, that it’s going to last forever.”

In 2008, winemaker Gideon Beinstock hired Caspi to be vineyard manager at Renaissance Vineyard and Winery in Oregon House. With Caspi’s degree in plant sciences from The Hebrew University and years of experience in water strategy in Israel, his mission was to convert 45 acres of conventionally cultivated vineyard to fully bio-dynamic viticulture. Production costs went down by 12 percent. Yields increased between 3 percent and 7 percent.

When Beinstock left Renaissance to found Clos Saron Vineyard and Winery a few miles away, he took Caspi with him. Clos Saron is so low-tech that grapes are harvested by touch. Its wine goes mostly to pricey restaurants in New York City. Caspi’s technique is most evident here. The base of each vine is encircled with a thick dressing of Caspi’s gourmet manure-compost-mulch. The application is repeated every year. In the last four years, the vineyard has been watered only twice.

Beyond his work at the vineyard, Caspi tends the gardens of about 50 “member” neighbors in and around Oregon House. Because this is a rural community, Caspi can put a sign on the road saying “manure needed,” and loads are brought to him for fermenting. The finished manure plus organic matter from garden waste, wood ash and olive paste all come from within a 10-mile radius. It returns to the members in the form of Caspi’s magical soil smoothie that retains water and nourishes roots.

On one day, Caspi might sow one member’s five acres with donated wheat berries, then low-gear the van up a twisted drive to check on what amounts to a large backyard row garden. When a field’s grass grows tall, he brings in a flock of another member’s sheep to act as weed eaters.

The reward? Every Wednesday, all year, each member gets a box of Caspi’s art – intensely flavored fruits and vegetables from one another’s property. A recent week brought strawberries, chard, cabbage, parsley, cilantro, beets, carrots and spinach. “And this is the lowest point of the year,” Caspi points out. This is the purest form of community-supported agriculture, known as CSA. But this version combines aggressive water conservation with food security. It gives more to the land than it takes.

If this sounds too fringey, it’s something to consider as more cities hook up homes to water meters. What Caspi does on a large scale can be done by city dwellers. “In your own neighborhood, yes, you can do this,” he says.

In the garden, take a load off and don’t till. Then follow Caspi’s instructions.

Find a source of manure and compost. Lay a thick layer, up to 4 inches, on the ground and plant right into it. Apply plant by plant rather than over the entire garden. For tomatoes, dig a deep hole, water the hole until the water drains, fill the hole with a mix of chicken manure and compost, then a tomato seedling. Add a bit more nitrogen in the form of half a teaspoon of chicken manure when you dig the hole. Water once more.

How long can you go without added water? A week? A month? Water only if lack of moisture is detected by sticking a finger into the ground. “The first year is hardest,” Caspi says. “Don’t give up. If you fail, you try again.”

As to your own sense of food security, you can have a community-supported agriculture system on your street. “One person grows the potatoes, someone else grows the beans, and another person grows herbs,” Caspi explains. Everyone adds to the pile tended by the neighborhood compost geek. In a few years, the soil will be so absorptive it will gulp winter rainwater and retain it through summer.

Without access to the livestock that live near Caspi, there might be a cost for store-bought manure, unless you have a friend with a horse, a cow or chickens. When a crop is ready, deliveries begin in staggered availability.

With wells already stressed in the Sierra foothills, Caspi remains an Israeli at heart, tinkering for extra droplets of water in what he presumes is a terminal drought.

“The plant takes only what it needs,” Caspi says. “This is how it works in nature. If you don’t need it, why do you want to take it?”

To protect ourselves from food shortages and to buffer California’s agricultural economy, we all should regard any adjustments that allow us to grow food with less water as permanent.