Dry farming in California – from Slate.com 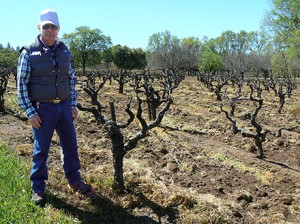 In a year with (practically) no water, here’s something that was inevitable: farming without any water at all.

Small farms around the Bay Area are reviving an ancient technique that is just what it sounds like. Add “dry farming” to the list of ideas that could get this dry state through the worst dry spell in half a millennium.

The Hoover Dam’s Lake Mead, the primary water supply for Las Vegas, has never had this little water to start June. Earlier this week, Fresno hit 110 degrees—the second-earliest achievement of that lofty mark in the 127 years that weather records have been kept there. New data on Thursday showed California has now gone five consecutive weeks with fully 100 percent of the state rated at “severe,” “extreme,” or “exceptional” drought. The state is getting by on meager reserves amid a multiyear shortage, and there won’t be any more significant rain until the fall: The annual dry season has begun.

The last measurable rain in San Francisco was April 25, which is about a month earlier than normal. The coast gets most of its drinking water piped in from the Sierras anyway, so a dearth of local rainfall hasn’t done much except make cars and sidewalks extra dusty. Jennifer Sedell, a student at the University of California–Davis, told me: “The only time I really see anything about it is when restaurants put up a note and say we’re not serving water unless you ask for it.”

And there are some upsides: “It was the best surfing season in years,” said San Francisco resident Ramin Taleghani in March, “as guilty as I feel saying that.” Persistent offshore winds—the same winds that trapped desert-dry air over California’s normally snowy Sierras all winter—made for perfect waves on the coast.

ccording to a San Francisco Chronicle analysis, the region is falling short of meeting conservation targets via voluntary water cutbacks. The Bay Area’s per capita water usage is already among the lowest in the state, so there’s not as much to cut as compared with other more water-hungry places. In San Jose, water use is actually upslightly compared with the past three years’ average. If usage isn’t curtailed soon, San Francisco is considering mandatory water rationing for the first time in more than 20 years.

One theory on the lackluster response is that the state’s crisis isn’t as immediately visible to city dwellers as it is to farmers, who use 80 percent of the state’s water. Higher prices for food will be felt only gradually, even though they could linger for years. As an example, consumers are still feeling the pinch from higher meat prices linked to a 2012 drought in Texas that forced ranchers to cut back on herds.

During my recent monthlong drought-themed road trip for Slate, I heard farmers blaming cities and cities blaming farmers for the ongoing water crisis. In fact, it was probably the most common attribution of blame for the drought I heard, above even the lack of rainfall itself. It’s clear that both sides think the other is wasting water. To investigate, I sought out an interface of the urban-rural divide on water issues: a farmers market in Oakland.

There, I found one possible answer that’s catching on: get rid of water entirely.

Dry farming, a longtime niche of California’s massive agriculture industry, isgathering conversation within farmers market circles around the Bay Area. Here’s how it works, according to Fast Company:

By tapping the moisture stored in soil to grow crops, rather than using irrigation or rainfall during the wet season, dry-land farming was a staple of agriculture for millennia in places like the Mediterranean, and much of the American West, before the rise of dams and aquifer pumping.

During the rainy season, farmers break up soil then saturated with water. Using a roller, the first few inches of the soil are compacted and later form a dry crust, or dust mulch, that seals in the moisture against evaporation.

Dry farming isn’t as simple as just farming without rain. During a drought, it’s even more challenging.

“We’re concerned about keeping these trees alive. We try to create a barrier to keep the moisture,” said Stan Devoto, a dry farmer based in Sonoma County who raises apples, wine grapes, and cut flowers for Bay Area farmers markets. “On the east side of your grapevine, where the sun rises, you strip all the leaves. That allows for better airflow. On the west side, where the sun sets, you keep a good canopy of leaves to protect the drought. We do it by hand.”

The dry-farming method has long been practiced successfully in Mediterranean climates with a long dry season like California’s—basically, dry farmers forgo the extra fertilizer, water, and other inputs that maximize yields. Advocates say its water starvation diet produces sweeter and more flavorful tomatoes, apples, and other fruit. Some of the best wines ever produced in Napa Valley were dry farmed.

But there’s a significant downside. Though his heirloom apples make a cider that “brings to mind Lambic beer,” according to the San Francisco Chronicle, Devoto says “people have to be willing to pay a little bit more for them.” Dry farmers like Devoto are trading quantity for quality.

Devoto concedes that’s one of many reasons dry farming won’t have the potential to overthrow conventional agriculture. The lower water usage means there’s a significant yield tradeoff: His dry-farmed apples average 12 to 14 tons per acre, less than half the 20 to 40 tons per acre irrigated apple crops typically get. The wells on his property simply don’t produce enough water to irrigate.

That’s made his decision pretty easy.

One Response to Dry farming in California – from Slate.com