Posted on September 5, 2014 by Office of Public Affairs

From the Bakersfield Californian 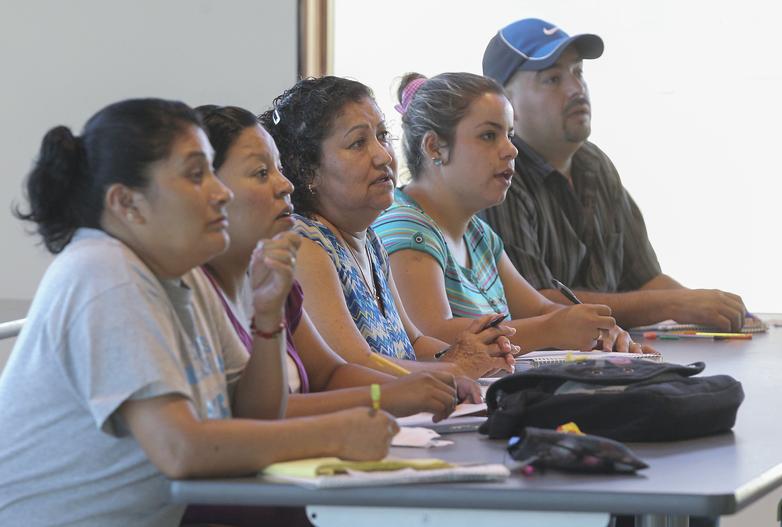 By Henry A. Barrios / The Californian
At present there are about 20 people participating in English classes at the new Lost Hills community center. The plan is to go out into the community and knock on doors on a Saturday to inform the Lost Hills residents about the class.

Ruben Garcia remembers life in the western Kern County town of Lost Hills 30 years ago when there were few street lights, little to do and most roads were dusty or, depending on the season, muddy.

But after hearing of Paramount Farms’ recent improvements to the town, the retired county parks worker decided to swing through on his way from the coast to his Delano home.

He could hardly believe what he saw: sidewalks and gutters, landscaping, a first-class soccer field, and two community centers bustling with sports and educational programming.

The changes in Lost Hills, widely praised by local officials and credited with lowering the community’s crime rate, have been directed by Lynda Resnick, co-owner of Paramount’s corporate parent and a longtime philanthropist in the Los Angeles area.

Since turning her attention to Kern County about five years ago, Resnick has brought the force of her substantial corporate resources to bear on Lost Hills. To date, she has invested about $15 million in an effort to create, as she put it, a “game-changer.”

“Although we’ve made good contributions to Los Angeles, really, it’s the Central Valley that needs us the most,” she said.

She dismisses any suggestion the improvements will increase her company’s influence over its employees’ lives. If anything, she said, it will empower the community like never before.

“Rather than being a company town,” she said, “it’s really about being an engaged neighbor.”

Nor is she ready to withdraw her focus. Resnick plans next year to partner with a local nonprofit and county, state and federal agencies on the construction of low-income housing in the rural, mostly Hispanic town of about 2,400 people. She also intends to start a microloan program to help residents launch their own businesses.

Garcia was almost taken aback by what Lost Hills has become.

Kern County politicians herald Paramount’s work in Lost Hills not only for the results but the approach. They say the company has carried out the improvements with the efficiency that only a large, private company with access to its own engineers and construction crews can.

From one perspective, Paramount is investing in its people and, in a sense, its own future. With nearly 2,000 employees in farming and processing operations in Lost Hills, it is almost certainly the town’s largest employer, and one of the surrounding area’s biggest landowners, with 100,000 acres in western Kern.

Paramount could have done the work in any one of several Central Valley communities where it has operations. A company representative said it chose to focus on the unincorporated community of Lost Hills over Avenal, Delano, McFarland and Wasco largely because of its size — Lost Hills measures a little more than five square miles west of Interstate 5 along Highway 46 — and the big impact its efforts could have in such a small town.

Residents say the changes have made a profound difference. Some spoke glowingly of Resnick and her commitment to improving the lives of their children, which the company says was the top concern expressed by local participants in a Paramount survey to identify community needs.

“She has totally turned around the community for the better,” said mother-of-four Maria Gamino, a purchasing coordinator at Paramount Farms in Lost Hills. “She builds stuff and she sees we use it, so she builds more.”

Paramount’s infrastructure improvements started, modestly enough, with $75,000 worth of lighting and other work on a basketball court at the park near the center of town in March 2011.

Soon the work was expanded to the nearby community center, which had been partly boarded up and was not widely used. At a total cost of $2 million, Paramount regraded the park, refurbished the building’s kitchen and bathrooms, installed exercise stations, put up lights for the soccer field and built a water spray park.

Next came the wider community. Between late 2011 and fall 2012, the company spent an estimated $8 million on a host of neighborhood infrastructure projects, from storm drains and trees to pedestrian walkways and bus stop shelters. The company even doubled the width of residential streets to 40 feet.

“It was unprecedented,” said Kern County traffic engineer Patricia Ebel, who helped review and approve the company’s plans. She said Paramount kept everything up to code requirements and paid for it all.

“I’m not sure how it would’ve been done if the Resnicks (Lynda and her husband Stewart) had not come through with this.”

With the street improvements finished, Paramount returned its focus to the park, building a state-of-the-art soccer field surrounded by an all-weather track. It also constructed a second community center that, with interior space of 3,200 square feet, was almost 50 percent bigger than the original center, which since its refurbishment had been fully booked with various events. Total cost for that phase of work: $5 million.

Bob Lerude, Kern County’s parks director, said he has never seen a private entity do anything approaching the improvements the company has made to what is now named Lost Hills Paramount Park.

He said Paramount did the work at a third of what it would have cost the county, and it did it quicker, too.

Another benefit he cited is the noticeable decrease in vandalism at the park.

“We’ve got families that have taken back the park, and you can see why,” he said.

In fact, data provided by the Kern County Sheriff’s Office show crime is down across the community.

Since the start of 2010, the number of reportable crimes in Lost Hills has fallen by a third, the agency reported. It said community-generated calls for service are down by a sixth over the same period.

Paramount plans to begin construction early next year on its biggest phase of improvements, an $18 million effort to build 21 three-bedroom rental homes and 60 apartments with two or three bedrooms each.

Because it will utilize a $2 million grant from the U.S. Department of Agriculture, the company said tenants will get rent discounts ranging from 30 percent to 70 percent. Built on land donated by Paramount, the residences are to be ready in 2016.

At the same time, the company hopes to roll out the microloan program for small businesses. It hinted at a new restaurant to be funded by a loan from Paramount, but otherwise it declined to share details about the initiative.

Lynda Resnick explained her involvement with Lost Hills as a departure from the philanthropy she and her husband have become known for in Los Angeles.

The couple own and operate a global enterprise employing more than 7,000 people and generating nearly $4 billion a year in revenue, much of it from nuts, citrus and pomegranates grown and processed in Kern County. They have made major contributions to UCLA’s Resnick Neuropsychiatric Hospital and the L.A. County Museum of Art’s Lynda and Stewart Resnick Pavilion.

Lynda said she realized a few years ago it was not enough to write checks to organizations the couple believed in. But rather than provide what she thought would help Lost Hills, she ordered a door-to-door survey asking residents what they felt was most needed.

“I came with my eyes from Los Angeles, but when I really took the time to listen and get into the minds and the hopes of the people there, I realized that the one thing that they cared about more than anything else was the future of their children,” she said in a phone interview.

That led her and her team at Paramount to focus on the park, where the company now supports fitness classes, ballet lessons, English-as-a-second-language classes, adults, children’s sports leagues and more.

To her, the work in Lost Hills is about helping a community that, too often, has lacked a voice in its own affairs.

“All I want to do is to help people help themselves,” she said. “Help them to fish, as they say.”

Kern’s elected officials including state Sen. Andy Vidak (R-Hanford) and Assemblyman Rudy Salas (D-Bakersfield) say Paramount is to be commended for tangibly improving the lives of its employees.

Former Kern County Supervisor Ray Watson, who represented the Lost Hills area for 10 years, said he remains “thrilled” with the Resnicks’ work at the park and elsewhere in the community.

Agreeing the improvements are responsible for lowering the community’s crime rate, he said he wishes other companies, particularly in the county’s oil and gas industry, would make similar commitments in Kern’s rural areas.

“I’m not sure that all of them can contribute the way that Paramount has, but I think business has some duty to the community.”

Lost Hills homemaker Jessica Ballesteros, the mother of five children between the ages of 18 months and 15, said the town’s park used to be a “horrible” place and unsafe for children.

But now, she said, her older kids are so involved with activities there — art and cooking classes, for example, and sports camps — they “don’t want to leave. That’s the problem.”

She credits Lynda Resnick above all for improving the community’s lot.

“I think she’s our guardian angel here in town,” Ballesteros said. “She’s done everything for our children, and she’s still trying to do more.”

See this article and additional photos on the Bakersfield Californian site: http://www.bakersfieldcalifornian.com/local/x110585255/Paramounts-Lynda-Resnick-leads-Lost-Hills-transformation

This entry was posted in Community-based Food System, Farm Labor. Bookmark the permalink.