Posted on October 10, 2014 by Office of Public Affairs 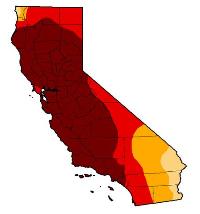 In January, the Drought Monitor first began to report areas of exceptional drought in California. Thirty-seven weeks later, the drought continues to rage.

According to the latest Drought Monitor report, currently 58 percent of California is in exceptional drought, unchanged for the 11th consecutive week. Last week, temperatures soared to 6 to 10 degrees above normal, and dry conditions dominated.

Just how dry is it?

With the beginning of a new water year on Sept. 30, the National Weather Service in Sacramento, Calif., issued some preliminary numbers to help put the state’s drought into perspective.

“No doubt about it, though, an above-normal Water Year is sorely needed to stave off even further depletion of surface and ground water supplies,” Mark Svoboda with the National Drought Mitigation Center wrote in this week’s report.

On Monday, the U.S. Energy Information Administration (EIA) issued a news release explaining the impact California’s drought has had on its hydropower.

Looking ahead, temperatures will likely remain between 3 and 6 degrees above normal across most of the West through Oct. 14. The Climate Prediction Center’s U.S. Seasonal Drought Outlook showed persist drought to dominate more than two-thirds of California through the end of the year.

One Response to California drought in perspective – from Drovers Cattle Network