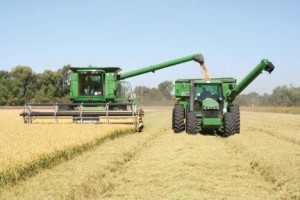 WILLIAMS, Calif. — As rice growers in California wrap up their harvest of a drought-diminished crop, good yields and more widespread sales of rice straw are helping them to at least partly make up for lost acreage.

The rice harvest was 85 percent complete as of Oct. 19, according to the National Agricultural Statistics Service. Leo LaGrande, a grower here, finished work over the weekend and said his yields deteriorated as the season went along.

“We had some fields that looked good earlier and we thought it would be better, but it didn’t quite mature to the yields we wanted,” he said. “I would call it an average year for us.”

“It helps,” Mathews said of the big yields. “The yields might be up ahead of last year’s state average, but not enough to close the gap in our shortfall (in acreage).”

California rice growers are expected to produce 36.8 million hundredweight, down 23 percent from last year, NASS estimated. About 140,000 acres of rice went unplanted this year because of water shortfalls — a 25 percent decrease from last year’s crop, according to the California Farm Bureau Federation.

LaGrande had to leave about one-quarter of his land unplanted, he said.

“We thought we were very fortunate because some of our neighbors had to leave 100 percent out,” he said.

However, the yield forecast of 8,000 pounds per acre would be a 1 percent increase from last year and would tie records set in 2004 and 2008, according to NASS’ office in Sacramento.

The optimistic outlook for yields follows a spring planting season that was more drawn-out than usual because exchange contractors along the Sacramento River agreed to space out their water delivery schedules to maintain the right river temperatures for winter run salmon.

Rice is typically planted between mid-April and mid-May, with harvests coming six months later, but many growers didn’t get started until mid-May and were still planting in June. Those that were still harvesting this week ran into a rainstorm on Oct. 20 that stopped their work.

While farmers welcome the rain, their water worries aren’t over. Many are unsure if there will be enough water to decompose rice straw left in fields.

Willows, Calif., grower Larry Maben may pump water from wells into his fields after harvest if there isn’t enough rain, which is “an awfully expensive source of water,” he said.

“It’s going to be kind of a balancing act,” Maben said.

With not as much water available for decomposition, more producers are baling and selling straw “than I’ve ever seen,” said Mathews, who’s on the USA Rice Federation’s executive committee.

University of California researchers reached out to growers this summer to promote converting their rice straw into “strawlage,” a feed that the scientists say is on a par with a low-quality alfalfa. UC Cooperative Extension advisors said the straw would be a good alternative for livestock producers confronted with feed shortages because of the drought.

The straw can also be used for erosion control in forest fire recovery projects, Mathews said. While decomposition helps the soil, growers can make up for the lack of straw by adding nutrients before planting next spring, he said.

LaGrande said he’ll probably bale 60 percent of his rice straw, the majority of which will be fed to cattle.

“It’s huge,” he said. “I think the dairy industry is grabbing onto it more every year. And this year with the drought, some cattlemen who really never tried rice straw before are buying into it. At $300 a ton for alfalfa or $40 a ton for rice straw, you’re going to try it.”