Honeybees stung by drought – from CNBC 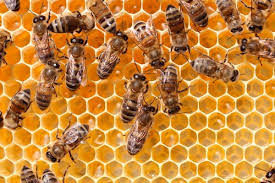 There’s very little in California’s agriculture industry that’s been left untouched by the ongoing drought, and bees are no exception.

Besides making honey, bees are crucial to pollinating about one-third of all U.S. crops.

But the drought, heading into a fourth year, is threatening honey production and the ability of beekeepers to make a living in a state that was once the top honey producer in the country.

“My honey production is down about 20 percent from the drought,” said Bill Lewis, president of the California Beekeepers Association.

Lewis, who manages around 50 billion bees in Southern California, explained that the lack of rain has reduced plants that provide food for the bees and the nectar they turn into honey.

Lewis said he’s had to feed his bees much less nutritional food such as sugar water that’s threatening the health of the bees and slowing the generation of honey.

“It doesn’t have the minerals that real food from plants have,” he said. “It’s like putting them on Twinkies.”

Lewis added that feeding the bees this way costs him more but it’s a cost he can’t pass on to consumers.

“Imports of honey keep me from raising my prices,” he said. “It’s a real challenge, financially.”

In 2003, California was the top honey producer in the U.S., but it has since fallen behind North Dakota, Montana, South Dakota and Florida. And according to the Department of Agriculture, California’s honey crop fell from 27.5 million pounds in 2010 to about 10.9 million pounds in 2013, or less than 5 percent of the country’s yearly $317 million crop.

But beyond honey production is bees’ crucial role in the pollination of numerous crops, like plums, strawberries, melons, lemons, broccoli and almonds.

“It’s hard to overstate the importance of bees to our industry,” said Bob Curtis, associate director of agricultural affairs at the Almond Board of California. “The drought has decreased forage for bees within California, and ensuring a variety of forage is a long-term challenge.”

Source: US Department of Agriculture

Pollination also is a revenue source for beekeepers, but a lack of irrigation water has left many fields empty. An estimated 420,000 acres of farmland went unplanted this year—about 5 percent of the total in the state. That means that fewer farmers are renting hives and beekeepers have less income.

“I’ve had to raise my prices to farmers who do rent, which hasn’t been easy,” said the California Beekeepers Association’s Lewis.

“If we don’t get any water, there will be more cutbacks on commodities,” said Eric Mussen, a professor of entomology at the University of California, Davis. “And that will affect bees, honey production and pollination of crops going forward.”

As bad as the situation in California is—80 percent of the state is in extreme or exceptional drought—the Almond Board’s Curtis said the lack of rainfall has not prevented almond growers from getting sufficient bee pollination so far.

But the drought is just one hazard making honeybees suffer. Beehive losses worldwide have increased over the years due to pesticides, parasites and colony collapse disorder, by which adult bees disappear from colonies due to various causes.

However, for Lewis, the drought is enough of a crisis to make a plea for help, even if it means using more water.

“It’s devastating,” Lewis said. “What people can do here is plant flowers wherever there’s dirt. The bees need them.”