Posted on January 28, 2015 by Office of Public Affairs 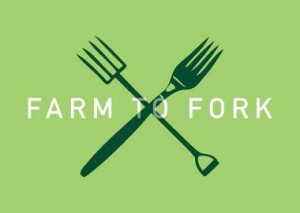 The farm-to-fork movement has been good to many restaurants in the Sacramento region. Easy access to locally grown food has built revenue and reputations.

But it’s not all about the fork. Some small farmers also are getting a boost, selling more products directly to consumers and restaurants.

Growing consumer interest in how food is made has created new opportunities, particularly for growers who focus on popular niche products, said Mary Kimball, executive director of the Center for Land-Based Learning in Winters.

The first folks to build connections between farms and restaurants had a lot of explaining to do, Kimball said. The farm-to-fork movement has changed all that.

“You don’t have a lot of the barriers that existed before. It’s not unusual for a farmer to sell directly to a restaurant or a store, and a lot of that is due to the farm-to-fork message,” she said.

One example is Passmore Ranch in Sloughhouse, where Michael Passmore has raised sturgeon, black bass, trout, catfish and other fish for more than a decade.

“Being a small farm, we can’t compete with the commodity market,” Passmore said. He sells mostly to high-end restaurants, offering the freshest possible products.

When Sacramento launched its first farm-to-fork celebration in 2012, Passmore was a supporter. His fish were featured prominently on both Farm-to-Fork gala dinners held on Sacramento’s Tower Bridge.

“At the time I didn’t see any benefits for us,” Passmore said. “But it has increased our business in Sacramento. It elevated the idea of using our fish and spread our reputation with restaurants and chefs.”

Farm-to-fork farming is growing but remains a tiny fraction of the industry, said Dan Sumner, director of the Agricultural Issues Center at University of California Davis and an agricultural economist.

Most farming is done on an industrial scale. Those operations have little to gain by selling directly to restaurants and consumers.

One reason: Farm-to-fork relationships require personal interaction by the farmers with visiting consumers or with chefs in nearby cities. And that can be expensive — in labor costs or in the owner’s time spent coordinating, delivering, marketing or selling at a farmers market.

That work also requires skills very different from those required in traditional farming, said John Young, Yolo County’s agricultural commissioner. He describes the growth of farm-to-fork agriculture as a work in progress.

“What farmers are really good at is farming, and only a minority of them are good at sales,” he said.

Building up a direct sales business requires a constant and consistent marketing effort to restaurants, schools, stores, farmers markets and households. That doesn’t comes naturally to farmers, he said.

“It’s not for everybody, but it has been a benefit to some growers,” Young said.

Some have a long history

Some farmers have sold directly to the public for decades, either on their farms or at farmers markets. Examples include members of the Apple Hill Growers Association in El Dorado County and growers that participate in the Mountain Mandarin Festival in Placer County.

At one time a typical customer would be a person stopping by to buy a box of oranges. Now it is a family or a group of people who come up to the farm together, Aguilar said. The farm offers food, tours and other activities to strengthen its appeal to visitors.

People are interested in knowing about the farm and how it works, Aguilar said. “The consumer is really quite ignorant about where their food comes from.”

He sells about 30 percent of his crop to people who visit the orchard. He gets a higher price for those sales than for what he sells wholesale to the supermarkets.

“We’ve been doing this all along. It think it is beneficial to our sales, and it is a good way to get our name out there,” he said.

While mandarin oranges have obvious consumer appeal, growers of some less sexy products — like grains — also have had some success from the farm-to-fork movement.

Michael Bosworth started approaching chefs with organic rice from his farm near Wheatland in 2006. At first, it wasn’t easy.

Most rice is mixed in bulk and milled, eventually getting a label of some kind. Bosworth mills and processes his own rice and controls every step of the process.

Some restaurants were interested in his pitch about how his rice is different.

“There was quite a bit of awareness at the higher-end restaurants, but that was it,” said Bosworth, owner of Rue & Forsman Ranch Inc.

Today, Bosworth sells 30 percent of his crop directly to restaurants and food service operations at UC Davis and at Intel Corp. in Folsom.

Growing public interest in food production also is changing perceptions about farming as a profession.

“We’ve seen a dramatic change in how people are seeing the farmers,” said Kimball.

Kimball’s Center for Land-Based Learning, which trains farmers, is seeing growing interest from people who want to make agriculture a career, she said. That is a big change in recent years, she said. Farming is now considered an interesting career path. It’s even considered cool.

“I grew up on a farm, and it was certainly not cool,” she said.

Making farming appealing to young people is important. The average age of the California farmer is 60, according to the U.S. Department of Agriculture.

Many of those interested in getting into farming are looking at small farms that work closely with restaurants, Kimball said. That kind of farming has been growing. In Yolo County, which tracks it, organic production has grown from $30 million in 2011 to $60 million in 2013.

The search for flavor

Chefs started the farm-to-fork movement by searching for stronger and more interesting flavors. They were reacting to the increasing blandness of some produce, a side effect of industrial agriculture.

“We’ve done a really good job in this country with distribution,” said Yolo agriculture commissioner Young. But the cost of that progress is that a lot of produce is grown to be transported and shelf-stable.

As a result, “We’ve become accustomed to eating anything all year long, like your tomato on a burger,” he said.

By seeking out the flavors of farm-fresh food, chefs have brought back the notion of eating what is in season, said Gail Feenstra, academic coordinator for the Sustainable Agriculture Research and Education program at UC Davis.

Among the local pioneers is Sacramento chef Patrick Mulvaney. For years he has contracted with farms for produce he uses at his Mulvaney’s B&L restaurant.

Mulvaney is gratified to see the farm-to-fork movement grow.

“That is a good part of farm-to-fork,” he said. “It creates a conversation where people talk about what they are eating and where it comes from. When you start that conversation, you get people interested and engaged.”