Posted on January 29, 2015 by Office of Public Affairs 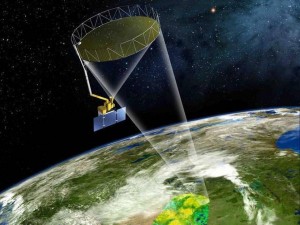 A large antenna shared by radar and radiometer is the most prominent feature for the Soil Moisture Active Passive satellite. It operates like a satellite dish, only is much larger, where a reflector collects all of the radio waves and focuses them into the feed horn. The feed horn collects the echoes from the radar and the surface emissions from the ground and sends them to the radar and radiometer electronics for processing. The feed horn is a large cone visible on the outside of the spacecraft. The antenna reflector is a mesh antenna 6 meters (about 20 feet) in diameter.

A NASA satellite being launched into space Friday will measure moisture in the top layer of soil, including soil on California farm fields far below.

The Soil Moisture Active Passive project is expected to provide crucial information to Central Valley farmers and water resource managers dealing with the multiyear drought. The mission, which was due to launch Thursday but scrubbed by NASA because of a weather pattern, will begin a three-year mission after liftoff from Vandenberg Air Force Base aboard a Delta II rocket.

The soil moisture information gleaned from the mission can be used by farmers to decide when to plant and harvest crops, said Narendra Das, project leader at NASA’s Jet Propulsion Laboratory, which is running the SMAP mission.

“This information will be a great tool for agriculture,” said rice farmer Charley Mathews Jr. Mathews owns a 700-acre rice farm in Marysville. He is an avid believer that more data can help his farming operation.

“For rice growing, it may help is preparing our rice fields,” he said of SMAP. “There are time periods when we prepare the soil or when we have rainfall events, and that is when we want to get our timing right.”

The 128-pound SMAP satellite will map soil moisture globally every two to three days. The SMAP data will be gleaned from space, using radar, with the use of a 19-foot antenna – the largest rotating antenna of its kind ever deployed by NASA.

It will take measurements 1 inch deep. The soil moisture it estimates will be matched to other data to provide accurate information on how much water is in the soil.

Only a tiny percentage of Earth’s total water is lodged in the top layer of soil. However, the water within that tiny layer plays an important role in moving water, carbon and heat between land and atmosphere.

The mission is the latest Earth-looking satellite effort at NASA, an effort that began in 1972 with the launch of the Landsat I.

The mission is the final of a recent slate of five Earth satellite missions to be launched by NASA within the past 11 months that began with the launch of the Global Precipitation Measurement Core Observatory satellite. Each mission is culling data at never-before-attempted resolutions.

NASA said it has partnered with a large California grower, Paramount Farms, on sampling studies and airborne experiments on the run-up to the launch.

Paramount Farms, based in Kern County, is one of the world’s largest growers and processors of almonds and pistachios. Paramount Farms declined to comment on its work with NASA.

That entity runs climate models for California, Nevada and Southern Oregon. “Once we understand what the data represents and what they mean, it may help us with runoff models,” Hartman said.

Hartman said it remains to be seen how accurate the data from SMAP will be – especially from heavily forested environments. In other areas it may help assess how much moisture exists in a given watershed, especially prior to the onset of winter storms.

“In the fall we’re sensitive to how ready the watershed is to respond to the season’s first rain,” Hartman said. “It can also help us in the period between winter storms when there has been a substantial dry period.”

NASA has also been working with the California Department of Water Resources and expects the department will use the SMAP data to run its water use models.

The DWP is allowing the use of 40 soil sensor stations throughout the state for the SMAP mission. The sensors will help NASA calibrate the SMAP satellite measurements, said Jeanine Jones, DWP interstate resources manager.

Jones said it remains to be seen how useful the data will be to the department’s water management aims.

“Currently in the water supply and flood control business, most agencies do not use soil moisture information,” Jones said. “There are no applications for that kind of data yet. We’ll see if this mission will be the impetus to develop applications for it.”