From Navy man to farmer – from the Fresno Bee

Posted on March 3, 2015 by Office of Public Affairs 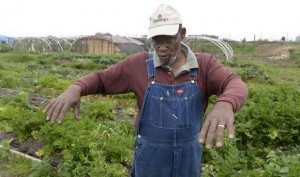 Every farmer has a story about how they got into agriculture. Some are born into it, while others, like city kid Rodney Wells, jumped into it as a second career.

Wells, the owner of Rancho de Rodney, a certified organic farm in southwest Fresno, grew up in Compton where his only connection to farming was a vegetable garden his father tended. But Wells wouldn’t make the city his home for long. At age 17 he joined the Navy as a way to escape a dismal future.

“I got out of there before I needed to choose which gang I need to be in,” Wells says. “In those days you either chose what gang to join or you ended up on a curb somewhere and none of those options appealed to me.”

Wells excelled in the Navy. At the peak of his 30-year career he supervised about 200 men as command master chief of the USS Pogy submarine.

After retirement, Wells and his wife Sherril, a lawyer, settled in Southern California. They moved to Fresno eight years ago when Sherril Wells became a judicial attorney with the Superior Court. After three decades in the Navy, it wasn’t easy for Rodney Wells to find a job that was challenging. He tried working at a hardware store and the Internal Revenue Service. He took several agriculture-related classes at Reedley College, where developed an affinity for farming.

“I began to see that food and farming were going to be critical in our futures,” Rodney Wells says. “And farming is no easy task. I learn something new all the time.”

Rodney Wells started off with an herb garden that Sherril helped develop about four years ago. Wells admits his first few times selling at a downtown farmers market were not successful.

“We have a card table and no tent or shade and it was the middle of the summer,” he says. “It was pretty awful.”

The couple learned from other farmers about marketing and choosing what sells.

“We grow what you can’t find at Save Mart,” Wells says with a smile.

Avid cook Sherril Wells encourages the farm’s customers to experiment with the herbs and offers several recipes at the Kaiser market.

“When you start using fresh herbs, it gives you so much flavor to whatever you are cooking,” she says. “And I think our customers appreciate a few suggestions.”

Although the couple are relatively new to the Kaiser market, they already are gaining customers.

Sam Mediati, of North Fork, was buying fennel from Wells recently. He and others are excited about the variety and quality of the farm’s produce.

“This is about the best that you can buy,” Mediati says.