Posted on April 1, 2015 by Office of Public Affairs 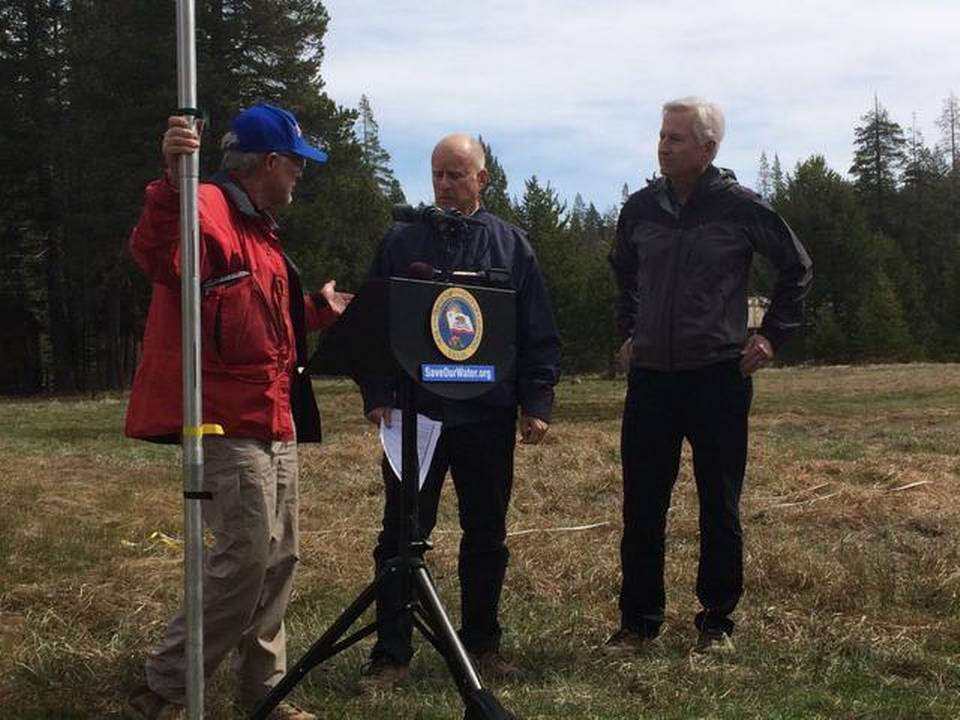 Following the lowest snow pack ever recorded and with no end to the drought in sight, Governor Edmund G. Brown Jr. today announced actions that will save water, increase enforcement to prevent wasteful water use, streamline the state’s drought response and invest in new technologies that will make California more drought resilient.

“Today we are standing on dry grass where there should be five feet of snow. This historic drought demands unprecedented action,” said Governor Brown. “Therefore, I’m issuing an executive order mandating substantial water reductions across our state. As Californians, we must pull together and save water in every way possible.”

For more than two years, the state’s experts have been managing water resources to ensure that the state survives this drought and is better prepared for the next one. Last year, the Governor proclaimed a drought state of emergency. The state has taken steps to make sure that water is available for human health and safety, growing food, fighting fires and protecting fish and wildlife. Millions have been spent helping thousands of California families most impacted by the drought pay their bills, put food on their tables and have water to drink.

The following is a summary of the executive order issued by the Governor today.

For the first time in state history, the Governor has directed the State Water Resources Control Board to implement mandatory water reductions in cities and towns across California to reduce water usage by 25 percent. This savings amounts to approximately 1.5 million acre-feet of water over the next nine months, or nearly as much as is currently in Lake Oroville.

To save more water now, the order will also:

The Governor’s order calls on local water agencies to adjust their rate structures to implement conservation pricing, recognized as an effective way to realize water reductions and discourage water waste.

Agricultural water users – which have borne much of the brunt of the drought to date, with hundreds of thousands of fallowed acres, significantly reduced water allocations and thousands of farmworkers laid off – will be required to report more water use information to state regulators, increasing the state’s ability to enforce against illegal diversions and waste and unreasonable use of water under today’s order. Additionally, the Governor’s action strengthens standards for Agricultural Water Management Plans submitted by large agriculture water districts and requires small agriculture water districts to develop similar plans. These plans will help ensure that agricultural communities are prepared in case the drought extends into 2016.

Additional actions required by the order include:

The full text of the executive order can be found here.

For more than two years, California has been dealing with the effects of drought. To learn about all the actions the state has taken to manage our water system and cope with the impacts of the drought, visit Drought.CA.Gov.

Every Californian should take steps to conserve water. Find out how at SaveOurWater.com.