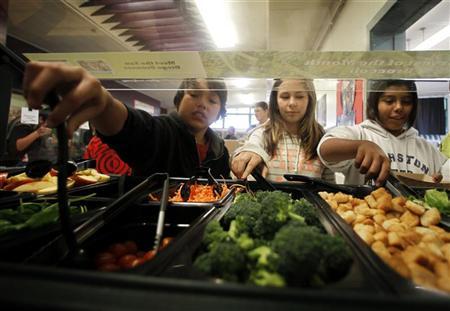 When Jim Houston was growing up, he said, “Eating was considered healthy.”

Thousands of cases of childhood obesity and millions of skipped school lunches later, school districts and nutrition experts are working together in earnest to make sure eating really does equal good health for young students.

Houston — now California’s undersecretary for food and agriculture — was at Heights Elementary School on Thursday to help celebrate “California Thursdays,” a joint project coordinated by 42 state public school districts and the Berkeley-based Center for Ecoliteracy, a nonprofit that promotes ecological education, with the full blessing of (and in partnership with) the California Department of Food and Agriculture.

In Contra Costa and elsewhere, the school districts use their joint purchasing power to buy healthy, regionally grown food at the lowest price possible. For now an initiative to provide lunches on Thursdays, officials hope to one day expand the new healthier food to every day of the week.

On Thursday, the gym/cafeteria at Heights was serving roasted chicken drumsticks from a Fresno County producer, as well as asparagus grown on a Stockton-area farm.

Pittsburg, along with the Oakland, Mt. Diablo, Antioch, West Contra Costa, Brentwood and Oakley districts, all held celebrations Thursday of their participation in the program. Most of the 42 districts are concentrated in the Bay Area and in Southern California; Contra Costa has the most districts participating so far.

Many of those districts have used grants to help pay for kitchens and other related equipment; Pittsburg received a $100,000 grant in 2013 from the U.S. Department of Agriculture.

Matt Belasco said Pittsburg has had that healthier emphasis for a few years and that a kitchen at each of the district’s 13 schools enables preparation of the healthy ingredients. “We’ve been a catalyst for the other districts in the county,” said Belasco, the Pittsburg district’s director of child nutrition services.

“California Thursdays” ramps up what Pittsburg already has been doing, he said, in large measure to work more area-grown produce into the menu. The “local” food aspect is touted for several reasons; it supports local and regional jobs, and shipping food shorter distances is hailed as an environmentally friendly move.

Belasco said that when Pittsburg got into full production with its kitchens, food-related jobs in the district rose from 43 to 108. Some nutrition expenses, including for the food itself, have gone down, but he said higher overall costs from hiring more workers to prepare better food are worth it.

Besides taste, a key to getting kids to eat what’s good for them, and not simply throw it in the organic recycling bin, Belasco said, is putting a human face to it. And on the walls of the Heights gym, one of those faces belongs to Stockton-area grower Dino Del Carlo, whose asparagus was being served Thursday on Heights’ salad bar. That large photo of “Farmer Dino” is there for a reason, Belasco said.

“It’s not a machine, it’s not magic. … It’s a real person producing that food.”

The bigger idea, several people said Thursday, is that kids who like their school meals are more likely to eat them and more likely to attend school in general. Better attendance begets better grades, which Sandip Kaur said in turn leads students to better colleges and better jobs.

“Kids who are well-nourished, well-fed, can give back so much more to the community,” said Kaur, director of the state Department of Education’s Nutrition Services Division, also on hand at Heights on Thursday.

A handful of Heights students questioned Thursday give the school lunches thumbs up. None had ever eaten the more processed, often more fatty and sodium-laden fare on which some school districts depend.

“I like the burgers — they’re made of real meat,” said fifth-grader Terrell Pike, 11. “I like the asparagus and fruit, too; it’s real food.”

“I wouldn’t really eat it that much if it was like that,” the 11-year-old fifth-grader said.