Say hello to the dementor wasp; it turns cockroaches into zombies – from the Washington Post 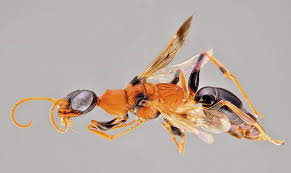 Add this to my nightmare list: A creature that turns prey into a zombie, then eats it alive.

That’s pretty much the M.O. of Ampulex dementor, a wasp named after the mythical “Harry Potter” creatures that suck souls with abandon. Dementor wasps inject venom into cockroach prey, right in the belly, rendering it a “passive zombie,” according to a new report from the World Wildlife Fund. The report details 139 new species discovered in the Greater Mekong region during 2014.

“Cockroach wasp venom blocks receptors of the neurotransmitter octopamine, which is involved in the initiation of spontaneous movement,” according to the report. “With this blocked, the cockroach is still capable of movement, but is unable to direct its own body. Once the cockroach has lost control, the wasp drags its stupefied prey by the antennae to a safe shelter to devour it.”

The red-and-black wasp is only known to live in Thailand. It has marked wings and “belongs to an ant-mimicking group of species with attractive coloration and rather bizarre habitus and probably also behavior,” authors write in a 2014 research article published in PLoS One.

The Museum für Naturkunde, a natural history museum in Berlin, asked 300 visitors to pick the wasp’s name from among four options: “Bicolor,” after its red-black pattern; “Mon,” after a local ethnic group where the wasp lives; “Plagiator,” since it mimics, or “plagiarizes,” ants; and “Dementor,” described to visitors as “magical beings, which can consume a person’s soul, leaving their victims as an empty but functional body without personality and emotions.”

One Response to Say hello to the dementor wasp; it turns cockroaches into zombies – from the Washington Post