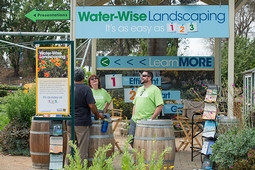 SACRAMENTO — Water-saving tips to weather the drought are key features at this year’s California State Fair, which runs through July 26.

The state Department of Water Resources’ award-winning “Californians Don’t Waste — Save Water in Your Home” exhibit in the Counties Building offers hands-on demonstrations of ways to conserve water in kitchens, laundry rooms and bathrooms.

The agency also has an outdoor booth at the fair’s farm at which experts such as landscape specialist Julie Saare-Edmonds give tips on landscape irrigation efficiency.

“We’re pleased by the turnout at the State Fair and the interest fairgoers show in our exhibits,” DWR spokeswoman Elizabeth Scott said in an email. “We’re also finding that the drought seems to be on everybody’s mind. Not only are folks interested in hearing from us about new ways to conserve, but they want to share with us what they’ve been doing at home to save water. That’s encouraging.”

The 162nd state exposition opened on a cool morning July 10 with the theme, “The Best is Back.” The Golden State’s abundance of crops and farm animals always take center stage at the fair, as its 32-year-old farm is one of the most popular destinations for attendees.

The farm’s attractions include a daily farmers’ market, an outdoor kitchen grill, an aquaculture exhibit, an insect pavilion and talks by the University of California’s Master Gardeners. A local supermarket chain also sponsors a “passport” program in which families can learn about crops and healthy eating while they visit the farm and eat a snack at the end.

Nearby, the fair’s livestock building and adjacent shaded stalls feature some 4,500 entries during the course of the festival, as livestock exhibits are shown in shifts. Entrants compete in youth and open divisions.

The DWR’s water-saving tips come as urban areas are under a state mandate to reduce their water use by at least 25 percent from 2013 levels, with some areas facing targets of up to 36 percent. Farms statewide have had their surface water allocations drastically reduced or shut off completely.

The department’s outdoor exhibit includes a low-water garden maintained with a water-efficient irrigation system. The exhibit offers drought-tolerant plant ideas and tips for conserving water with compost and mulch, according to a news release.