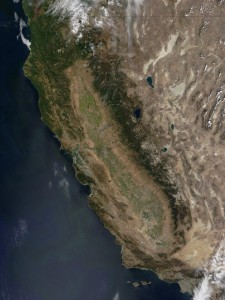 Among other things, the agreement will expand cooperation on space-borne remote sensing efforts to gather soil moisture data. One potential outcome of the expanded partnership between USDA and NASA could be using satellite data to create a series of soil moisture maps for California that could be used to improve weather and water availability forecasting and provide a drought early-warning system to producers, particularly in California.

Under the new agreement, USDA now has expanded access to data from NASA satellites that will help Forest Service fire fighters and first responders better detect wildfires and predict their behavior. USDA and the Department of the Interior have spent nearly $1.5 billion annually over the past decade on wildfire suppression, but this new technology has the potential to stop wildfires before they start, saving money, land, and even lives.

For more than 75 years, the Ames Research Center has led NASA in conducting world-class research and development in aeronautics, exploration technology and science aligned with the center’s core capabilities. The International Space Station (ISS), operated by NASA, includes a National Laboratory where ground-breaking scientific research is conducted every day. Currently, NASA has a mini veggie farm at the International Space Station to grow fresh produce like lettuce.