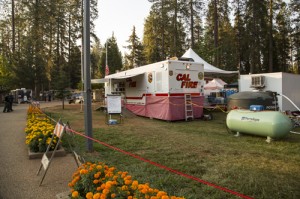 Fire base camp at the Nevada County Fairgrounds.

There has been an early start to fire season in California. As fire fighters travel around the state to fight a series of devastating blazes, local fairgrounds are renewing their support by again serving as base camps for the crews.

So far this year, fairgrounds in Del Norte, San Bernardino, El Dorado,  Nevada and Lake counties have opened their gates to feed and house firefighters. At some locations, at-risk animals have been welcomed, too – horses, cattle, dogs, cats, goats, sheep, pigs, poultry and peacocks.

Additionally, the El Dorado County Fair was used as a base camp for 30 search-and-rescue dogs and their handlers during a search for a missing person. 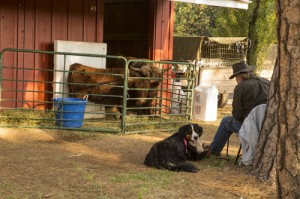 Providing base camp services is one of many ways California’s network of fairs steps in to serve communities. The fairs are committed to this role even though they’re contending with budget reductions that have resulted in layoffs and losses of local programs. They share a strong belief in maintaining this essential level of community service.

The California Department of Food & Agriculture’s Division of Fairs & Expositions provides fiscal and policy oversight to the network of California fairs and ensures compliance with laws and regulations. California’s 78 fairs are located throughout the Golden State from early spring to the fall of each year. We are proud to call them our partners.