Posted on August 6, 2015 by Office of Public Affairs 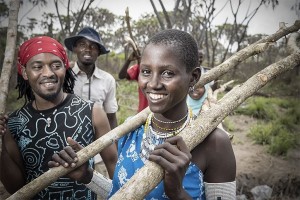 Some of America’s most popular competition shows feature dozens of women vying for the attention of one man, singers attempting to impress judges who can’t see them, and celebrities trying to keep up with professional dancers. Tanzania’s popular reality series stars female farmers.

More than half of the country’s 45 million people tune into Mama Shujaa wa Chakula, or Female Food Heroes, by way of TV, YouTube, radio recaps, and newspaper articles, according to PRI. The newest season, set to shoot for three weeks in August, features 18 women in a village sharing farming techniques, attending training sessions, and, of course, competing in challenges. The winner is chosen from a combination of viewers’ votes and a panel of judges.

Antipoverty organization Oxfam created the series to educate female farmers on progressive agriculture techniques, demonstrate their abilities to their peers, and grant them a larger voice in their communities. Oxfam estimates that 75 percent of farmers in Tanzania are women, but gender bias leaves their contributions overlooked and undervalued.

Farms helmed by women are often less successful owing to difficulties in securing land rights, as well as unequal access to resources and laborers. This problem persists across Africa, where almost half of all agricultural workers are women—and it makes their farms less productive, according to a 2014 study by the World Bank. In Tanzania, female farmers produce 14 percent less than their male peers. Lower yields hurt both men and women; the report determined that if women were treated equally in agriculture, farm yields would increase by up to 30 percent, feeding 150 million more people daily.

While only one woman is named the winner, each contestant heads home with a prize perhaps even more valuable than $10,000 in cash and farming supplies: respect. The show’s popularity turns them into celebrities in their communities, and with that higher status, they have a voice to make change. Past contestants have gone on to attend global conferences on women’s rights, manage their own stores, and sit on ordinarily male-dominated local councils.

One Response to Tanzania’s newest celebrities: female farmers – from takepart