Posted on November 20, 2015 by Office of Public Affairs 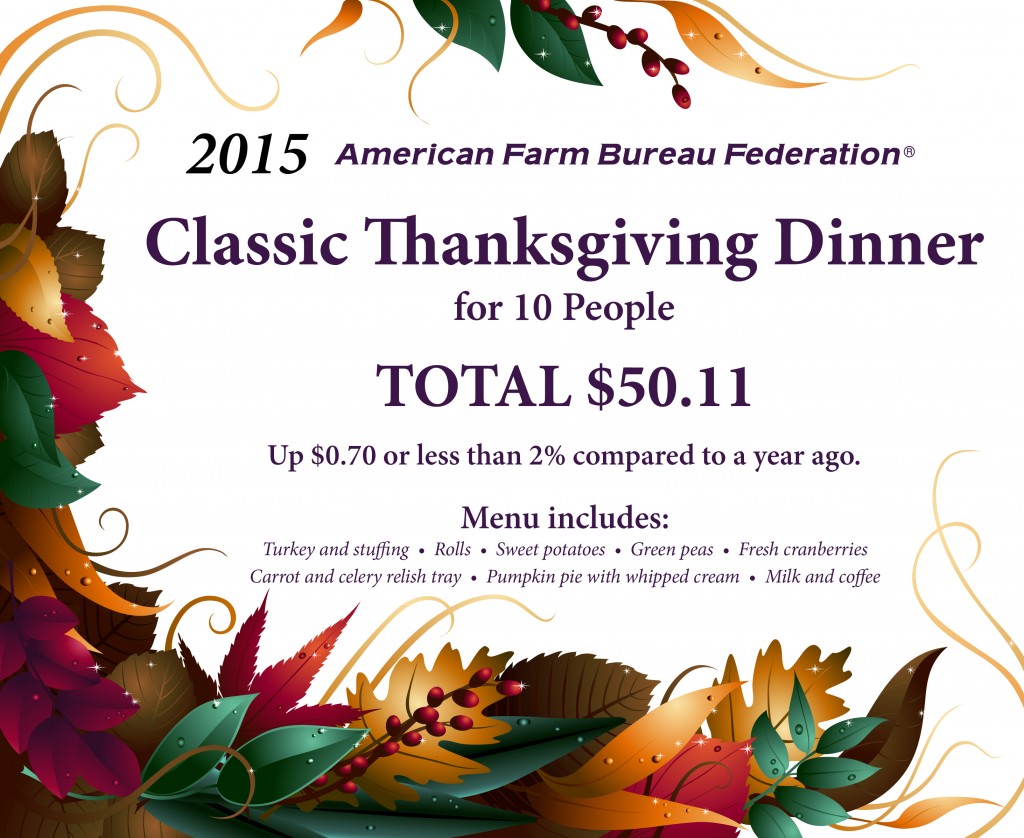 The American Farm Bureau Federation’s 30th annual informal price survey of classic items found on the Thanksgiving Day dinner table indicates the average cost of this year’s feast for 10 is $50.11, a 70-cent increase from last year’s average of $49.41.

“Retail prices seem to have stabilized quite a bit for turkey, which is the centerpiece of the meal in our marketbasket,” AFBF Deputy Chief Economist John Anderson said. “There were some production disruptions earlier this year due to the highly pathogenic Avian influenza outbreak in the Midwest. Turkey production is down this year but not dramatically. Our survey shows a modest increase in turkey prices compared to last year. But we’re now starting to see retailers feature turkeys aggressively for the holiday. According to USDA retail price reports, featured prices fell sharply just last week and were actually lower than last year,” he added.

“Despite concerns earlier this fall about pumpkin production due to wet weather, the supply of canned product will be adequate for this holiday season,” Anderson said.

Items that declined modestly in price were mainly dairy items including one gallon of whole milk, $3.25; a combined group of miscellaneous items, including coffee and ingredients necessary to prepare the meal (butter, evaporated milk, onions, eggs, sugar and flour), $3.18; a half pint of whipping cream, $1.94; and 12 ounces of fresh cranberries, $2.29. A one-pound relish tray of carrots and celery (79 cents) and one pound of green peas ($1.52) also decreased slightly in price.

The average cost of the dinner has remained around $49 since 2011. This year’s survey totaled over $50 for the first time.

“America’s farmers and ranchers are able to provide a bounty of food for a classic Thanksgiving dinner that many of us look forward to all year,” Anderson said. “We are fortunate to be able to provide a special holiday meal for 10 people for just over $5 per serving.”