Posted on November 23, 2015 by Office of Public Affairs 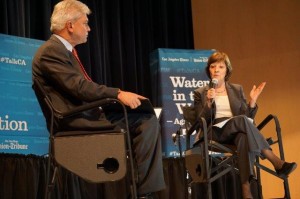 Some of the state’s top water officials, along with local farmers and activists, convened in Clovis on (November 18) to talk about agriculture and the impact of the drought.

Los Angeles Times reporters hosted the conversation, called “Water in the West,” as part of a series of talks around the state. Helping sponsor the event were the San Diego Union-Tribune and Netafim, an agriculture drip irrigation company.

Cowin said the past four years have given California a crash course in how to adjust to limited amounts of water. But he said the state still needs to become more efficient and invest more in its water systems.

“It’s a matter of preparing for the future,” he said. “These past few years have given us, I think, a preview of what we can expect more of in the next century. If scientists are correct, if global climate change affects California the way we now expect it to, we can expect more of these extended dry periods.”

Nikiko Masumoto is already preparing for climate change on her family’s organic peach, nectarine and grape farm in Del Rey. The Masumotos have experimented with deficit irrigation (limiting water) but grew smaller peaches as a result.

Masumoto said the marketplace isn’t in favor of small fruit. She said she hopes the drought leads people to understand that size doesn’t dictate value of food.

“We have a very narrow definition of what a perfect peach, for example, is,” she said. “It might not always be pretty.”

Times correspondent Peter King, a Fresno native and former Bee staff writer, moderated a separate question-and-answer session with Ross. He asked her to address the paradox between people hearing about the suffering of farmers and rural communities, while at the same time California is experiencing record crop production value.

Ross said farmers are resilient and becoming more productive with the water available by focusing on higher economic uses, such as nut trees. That adaptation cloaks the harsh reality that some have felt during the drought, she said.

But Sarah Woolf, a farmer and president of the water management service Water Wise, said there isn’t enough water to meet the demands of a growing population, environmental protection and the agriculture industry. She stressed the importance of being more efficient in water use and improving storage and groundwater supplies.

“There’s land not being farmed,” she said. “I don’t think, as a farmer and someone who recognizes the high demand of California food products, that we should decrease our agricultural footprint.”

Cowin agreed about the need for better drought preparation, but he said there’s no way to avoid its effects completely.

“I don’t mean to sound pessimistic here, but I do think it’s not likely that we’re going to make such investment that we’re going to be able to withstand a four- or five-year drought of the nature we’ve seen the last few years without some level of impact,” he said.

This entry was posted in Drought, Uncategorized and tagged Drought, Water in the West. Bookmark the permalink.