Posted on November 24, 2015 by Office of Public Affairs 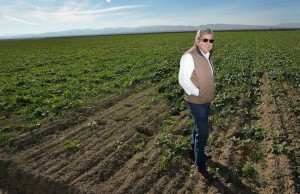 Sano Farms field manager Jesse Sanchez, 63, of Fresno, stands in a field filled with ground cover on Nov. 18 in Firebaugh. He recently won recognition from the White House for his contributions to the farming operation, including new soil and tilling techniques. The ground cover will be tilled into the soil which will enrich the soil with organic material to help the crop that will be planted in the spring. Silvia Flores, Fresno Bee.

By Megan Ginise, The Fresno Bee

On the outskirts of the western San Joaquin Valley, amid one of the worst droughts in California history, Jesse Sanchez is making waves with his agricultural techniques.

Sanchez, 63, is the farm manager at Sano Farms, a 4,000-acre operation near Firebaugh and Mendota that grows garbanzo beans, garlic, almonds, pistachios, and processing and fresh market tomatoes.

By making soil health a priority at Sano Farms, Sanchez and current owner Alan Sano have reduced tillage overall, using less fuel and lowering the cost of their production; integrating off-season cover crops; and documenting many of the improvements they’ve had in soil health, quality and function. After 30 years earthworms have returned to the soil, a clear sign, Sanchez said, of the success of their practices. And he has shared his knowledge and experiences, leading tours of the farm with groups from as far away as Egypt. His efforts have been noticed.

Sanchez recently received the White House Champions of Change award in the sustainable and climate-smart agriculture category for his commitment to healthy soil practices and willingness to share the information with others. He was one of only 12 honored at a ceremony on Oct. 26 in Washington, D.C.

Jeff Mitchell, a crop researcher with University of California at Davis, who has done research throughout the San Joaquin Valley for the last 16 years, has watched Sano Farms flourish under Sanchez and Sano’s care.

“They’re very much pioneers, very innovative and persistent as well,” Mitchell said. “What they’ve done through the vision they have had, sticking with it, learning step-by-step how to improve the system, how to adjust things.” The result, he said, is state-of-the-art production systems that will lead to “the improvement and sustainability of farming systems here.”

Sanchez started working at Sano Farms in 1980. He moved from Michoacán, Mexico, to Mendota, where he worked during the day and took college classes at night. But Sanchez said his interests propelled him elsewhere. His wife, Lourdes, was working as a secretary at Sano Farms, where Sanchez met Sano for the first time.

What started as a family tradition for Sano Farms has grown into an intense desire to see that same tradition continue. Sano Farms started in the early 1960s near Le Grand, but moved to the west side in 1974. Sano has been working alongside his brothers since he graduated high school in 1980, about the same time Sanchez showed up to the farm.

Sanchez is the type of person who always likes a challenge, he said, and when he saw an opportunity at Sano Farms, he jumped on it.

“I see one thing and if I like it, I’m going to do it, and that’s how I started here. I see a challenge and want to work out the answer. When I started working with Alan’s father (Rinks Sano) back in 1980, I told him what I wanted to do and he liked the idea. We were a team.”

Sanchez has been innovative since the beginning, Alan Sano said. Right away, when Sanchez noticed a problem, he kept working on it, always trying to make things better.

When drier seasons hit the farm 15 years ago, they switched to drip irrigation, bringing water closer to the plants.

“(Sanchez’s) really aggressive as far as looking into new technologies, going ahead,” Sano said. “That’s a lot of how we got started.”

The farm used to rip the soil and work it every year behind tomato and cotton harvests. When Sanchez noticed the farm was losing topsoil every season the ground was leveled, he put crop-cover on the once empty plots to reintroduce nutrients into the soil and keep the topsoil grounded, returning some of the lost vitality from the drought.

The White House award recognized Sanchez for his attentiveness to soil health. Through the renovation of his entire farm system, Sanchez has lowered Sano’s use of diesel fuel and has lowered dust emissions, increased the soil’s nitrogen and carbon concentrations, and has brought new life back into the soil.

“By using minimal tillage, the air is clean, the tractors run less in the field, less dust and less fumes, so it helps to create a healthier environment in the whole system,” Sanchez said. “It helps everybody. We help the soil and it’s healthier for the human, more lasting energy for everyone.”

It’s all connected, Sanchez said, from the attention he pays to the plants to the final product that gets delivered, to the positive effect they are having on the environment, one small seed at a time. It’s a system that has taken years to develop and tweak, and every year brings a new challenge from the weather. Sanchez found answers to the challenges from his own roots.

His grandfather, Alberto, owned a small farm in Mexico more than 50 years ago, and Sanchez remembers growing up and playing there. Alberto used to have three harvests in one season, corn, beans and squash all in the same time. They used the soil differently then, and Sanchez said principles of taking care of the earth are what he remembers most.

Sanchez said he never expected to work in farming. He saw how hard his grandfather toiled, and figured he would go to school instead. But he enjoys working with the soil to see what he can create. The better products that come out, he said, the harder he works to keep improving.

Sanchez and Sano are looking toward the future, even as they battle the drought. Because of their zero water allocations from the Central Valley Project, they had to dig new wells last year. Water from the wells added salination to the soil, damaging the health of the plants. It’s a constant battle.

They plan on using drones next year for the first time for aerial inspections to see if the plants are stressed. They will look at coloring and potential disfigurations. The cameras can spot problems sooner than the naked eye.

Farmers don’t always like change, Sanchez said. Even he had to attend several conferences in Texas and Arizona throughout the years to help him believe in the new methods. As a farmer, he said, you have to believe.

“It’s kind of hard to change the system you farm,” Sanchez said. “So little by little we started to change, and now it’s changed the whole system.”