Posted on October 21, 2015 by Karen Ross, Secretary, California Department of Food and Agriculture 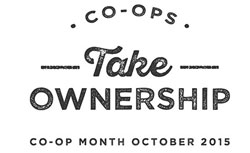 Cooperatives are at the very heart of agriculture. Cooperative systems emerge at all levels of production and extend through many facets, from harvesting to marketing. Co-ops can be complex operations that serve as supportive foundations for farmers and ranchers, and they can be as simple as direct marketing between farmers and consumers. Co-ops enable many small family farm operations to reach markets, direct research, and connect with consumers in ways they would not be able to do alone. The United Nations has said that, “Cooperatives are a reminder…that it’s possible to pursue both economic viability and social responsibility.” Our agricultural co-ops achieve both on a daily basis while making an invaluable contribution, as demonstrated by the designation of October as National Co-op Month.

The USDA has found that cooperatives earned $6.5 billion in net income and generated $246.7 billion in total revenue last year. Net income increased 16.5 percent while revenue rose 0.4 percent from 2013. Co-ops set records for income and revenue in 2014 for the fourth year in a row.

In California, co-ops have been major success stories, transforming themselves into brands sought around the world – for example,  Sunkist, Blue Diamond, Sunsweet and Sun-Maid.  Four of our state’s Ag co-ops rank in the top-100 nationally: California Dairies Inc. of Artesia at number-six, Blue Diamond in Sacramento is #25, Sunkist out of Sherman Oaks is #32, and Pacific Coast Producers of Lodi is #71

Here at CDFA, we are committed to policies that that will allow co-ops to continue to flourish. This is demonstrated by the state’s Certified Farmers Market program, signed into law by Governor Brown during his first term in office, back in 1976. Many California farmers involved in this and other aspects of the direct marketing industry, including CSAs, have established and participate in cooperatives. California is now the national leader in farmers markets, with approximately 800 of them featuring  more than two-thousand certified producers. And California’s CSAs deliver farm-fresh produce directly to thousands of loyal customers.

While it’s important to recognize that co-ops remain a major component of the food and agricultural industry,  they are also able to help people in virtually all segments of the economy. Cooperatives are an extension of the human spirit and a daily reminder that we’re all in this together!