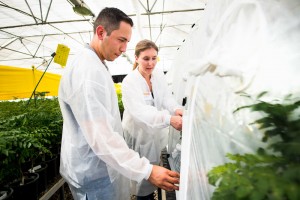 Cal Poly Pomona is training an army of tiny wasps to battle the Asian citrus psyllid, a voracious pest responsible for crippling the Florida citrus industry that has recently infiltrated Los Angeles County.

Armed with a $400,000 grant from the Citrus Pest & Disease Prevention Program, the agriculture-oriented university unveiled a new research greenhouse Monday that may become the second-largest facility in Southern California (the largest is in Mt. Rubidoux) for breeding the Tamarixia radiata, a natural predator of the tree-killing psyllid.

The new flank in the war against the citrus plant disease Huanglongbing, carried by the pest, is part of a multi-pronged battle to reduce the infestation of psyllid in Los Angeles, Imperial, Ventura and Riverside counties, where growers make up a portion of California’s $3.3 billion citrus industry.

Huanglongbing, known as yellow dragon disease, is a disease that kills citrus trees but does not harm people, agriculture officials said. The tiny pest — about the size of a grain of rice with a brown, mottled body — is causing a huge problem. The pest feeds on citrus tree leaves and stems, infecting the tree with the bacterial disease that has no cure.

By fighting the plague with a biological weapon, i.e. the pest’s natural predator, Cal Poly Pomona and the California citrus growers hope they can reduce the pest’s population and slow the disease.

“Huanglongbing is the biggest threat the California citrus industry has ever faced,” said Nick Hill, chairman of the Citrus Pest & Disease Prevention Program and a grower of citrus trees in the San Joaquin Valley. Using biological means “is not a silver bullet,” he said, but the wasps represent the best chance growers have of stopping the spread of Huanglongbing in California.

Asian citrus psyllid were found in Hacienda Heights in 2012 and in 20 trees in San Gabriel in 2015, said Alex Muniz, an environmental scientist with the California Department of Food and Agriculture. Documents say the insect infestation is concentrated in the San Gabriel Valley.

The CDFA can release 5,000 to 12,000 of the tiny wasps, smaller in size than the psyllid, per neighborhood. The wasps eat the pest and the female also kills the psyllid’s nymphs. The agency will begin releasing the wasps in Kern County in a few weeks in an attempt to stop the spread into the fertile San Joaquin Valley, Muniz said.

California citrus growers have partnered with Cal Poly Pomona and the California Department of Food and Agriculture to develop natural solutions as an alternative to insecticide application.

“Without this partnership with Cal Poly Pomona, our 3,000 growers may not be able to exist by the year 2020,” said Joel Nelsen, president of California Citrus Mutual, a trade group.

But eradication also must take place in the backyards of millions of Southern Californians who own infected orange or lemon trees.

“It is a real threat because this disease can be harbored in homeowners’ trees and in small acreages,” acknowledged Valerie Mellano, chair of the university’s Department of Plant Science. “You cannot go into everyone’s yards and spray (pesticides). This is a biological control.”

From backyards to commercial orchards, from oversea shipments and from trees brought into the United States from infected countries by air travel, the tiny bug is on the move, threatening the entire citrus industry. The recent discovery in L.A. County raised alarm bells from those who’ve witnessed the devastating effects elsewhere.

“Wherever is has established itself, in China, Southeast Asia, Mexico, Brazil, it has decimated those (citrus) industries. Now it is on our shores,” Hill said.

In Florida, about 70 percent of the citrus industry is gone, Nelsen said. “They didn’t take it seriously and it got totally out of control. The bug started spreading disease to the point where they are bulldozing hundreds of thousands of trees.”

The thought of losing California-grown oranges, limes and lemons — whether from commercial farms or backyards — would be like erasing a part of the Golden State’s heritage, Hill said. “Citrus has been around since the 1840s. Californians love their citrus and we love growing it. We want to save our industry,” Hill said.