Posted on October 4, 2016 by Office of Public Affairs 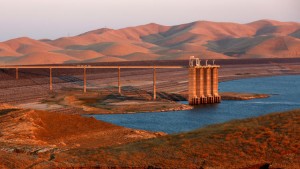 There were high hopes going into water year 2016.

To hear some forecasters and scientists tell it, El Niño was coming to save California. With a little luck and a lot of rain, the drought might finally recede in its fifth year — or at least loosen its grip on the state.

The weather phenomenon did show up, fueling some storms in Northern California. But it fell far short of the lofty expectations.

On Friday, water year 2016 ended with a whimper.

“If you had to put a one-word descriptor on this water year, it would be ‘dry,’” said Doug Carlson, a spokesman for the California Department of Water Resources.

“The [precipitation] indexes have been flat-lining since June,” he said. “If this was a body, it would be in cardiac arrest.”

And if weather-watchers learned anything from the latest cycle, it’s not to guess about what might come next.

“Anybody who tells you what’s going to happen next year is a liar or delusional,” said Felicia Marcus, chairwoman of the State Water Resources Control Board. “The best they can say is what the trends might be and what the odds might say.”

Though the rain and snow that California got did help refill reservoirs and replenish groundwater basins, the precipitation also may have muddied the state’s drought messaging in ways that did harm to conservation efforts.

Experts track the state’s hydrology based on a calendar that begins on Oct. 1 — when the rainy season begins — and ends on Sept. 30. Officials say water year 2015 was among the driest on record, so to some, 2016 may have left the impression of being a drought-buster.

Indeed, one highly cited index of eight weather stations in the northern Sierra Nevada shows the area got about 116% of normal precipitation during the last water year.

But officials are quick to point out that other indexes show about average rainfall in the San Joaquin Valley area and below average in the Tulare Basin.

Meanwhile, the state’s reservoirs — fed by the summer snow-melt — currently are at about 80% of their average storage.

According to water officials, warm temperatures melted a below-average snow pack earlier than usual. And since the water contained in California’s snow pack measured only about 85% of average this spring, the state actually had suffered a “snow drought.”

As of Friday, Lake Shasta had slightly more water in it than the historical average, but the San Luis Reservoir continued to hover near its lowest level in years. About 62% of the state remains in severe, extreme or exceptional drought, according to the U.S. Drought Monitor.

Because the situation has eased somewhat, the water board relaxed mandatory conservation requirements across much of urban California during the 2016 water year.

For 12 months beginning in June 2015, each of the state’s more than 400 urban water suppliers was required to reduce usage by a certain percentage. But as more and more rain arrived, regulators lowered many of the savings targets. Eventually, the majority of suppliers were released from mandatory conservation altogether.

Californians have continued to save water under the eased restrictions, but at a lower rate than in the summer of 2015.

Regulators have warned that they could impose high water conservation levels again if California experiences another dry winter. And the National Oceanic and Atmospheric Administration’s Climate Prediction Center has suggested that weak La Niña conditions — which correlate with those dry winters — could develop.

But officials need not look back far to be reminded that forecasts can be wrong.

“Last year,” Marcus said, “people predicted we’d get the Godzilla of El Niños, and we got Mr. Stay Puft.”