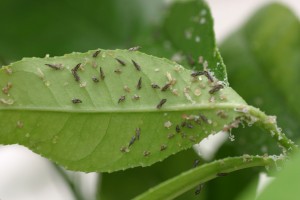 CDFA is observing Invasive Plant Pest and Disease Awareness Month throughout April. The USDA, CDFA and organizations across the agricultural spectrum are reminding the public about the risks that invasive plant pests, diseases and harmful weeds pose to America’s crops and forests—and how we all can prevent their spread

The winged insect is no bigger than a grain of rice, but it is threatening to destroy California citrus one tree at a time.

Concentrated the last decade-plus in Los Angeles and Ventura counties, the Asian citrus psyllid made its way into north Orange County in 2009. Just the other day, a residential tree in La Habra was removed by the California Department of Food and Agriculture, the first O.C. tree found infected by a lethal bacteria the insect can spread.

To protect the state’s citrus, the ag department has placed at-risk Southern California counties, including Orange, Los Angeles, Riverside, Santa Barbara and the San Gabriel Valley, under quarantine; citrus plants purchased at a nursery or a farmer’s market within county boundaries must meet regulations to prevent the insect from spreading its bacteria, said Jay Van Rein, a department spokesman.

“A few great plagues have hit citrus over the years,” Van Rein added. “This is right up there.”

(Learn more about the Asian citrus psyllid and Huanglongbing, or citrus greening)

With origins in humid Florida, where occasional hurricanes spread the insect waywardly, the Asian citrus psyllid leeches on leaves and stems, and can infect citrus trees with Huanglongbing, a bacteria that causes asymmetrical yellowing and molding in leaves, and keeps fruits from ripening.

The disease was first found locally in 2012, in Hacienda Heights. In 2015, a tree was reported in San Gabriel, and last year, Cerritos had its first confirmed case.

All three trees were in residential yards and were removed.

“We’re trying to protect from the disease spreading in residential communities,” said Van Rein, adding that Southern California’s commercial citrus trees – those on golf courses, in parks, on medians on the highway – have remained largely unscathed.

Once a tree is infected, it will die. The disease has no cure.

Residents should call the state’s free pest hotline if they believe the insect has infected a tree in their yard. Officials will remove the tree and prevent the formation of a “reservoir of bacteria, which insects can pick up and move to other trees,” Van Rein said.

“California is the latest citrus-growing region to have this arise on its shore,” Van Rein said, noting cases in Florida, Brazil and China. “We’ve learned a lot from other folks who’ve had it.”

Once a big seller, Scott Brown, who owns Anaheim Wholesale Nursery and Landscape Supply, stopped selling citrus trees a couple of years ago when the cost of treating each one every three months weighed on his checkbook.

Brown said larger chain stores still sell citrus trees, but with red or blue tags on them informing prospective owners when they were last treated.

Though many nurseries have stopped selling such trees, Brown said customer demand has risen. “A lot of people are hunting them out. But they’re not out there.”

Seen easiest when new leaves are growing on the tips of branches, the Asian citrus psyllid produces a white, waxy substance. Citrus tree owners should check leaves and stems monthly for the pest.

“We’re trying to preserve our trees,” Van Rein said. “Buying time for the citrus industry to invest in research to come up with a solution to this.”