To Fight Climate Change, Heal the Ground – From the NY Times

Posted on June 5, 2017 by Office of Public Affairs 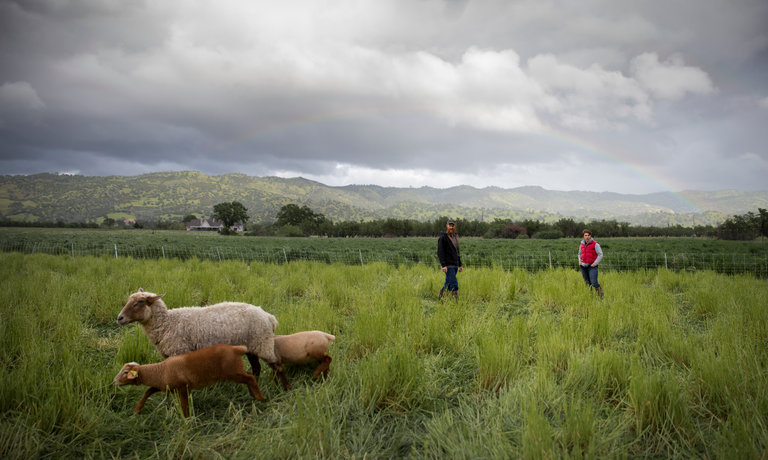 Sheep grazed at a field planted with a cover crop at Skyelark Ranch in Brooks, in Yolo County. California is encouraging farmers to strengthen their soils to help draw more carbon into the ground. Credit Joe Proudman

The climate change fight has focused largely on cutting emissions.

But California is now considering another solution: dirt.

Whereas an overabundance of carbon in the air has been disrupting our climate, plants are hungry for the stuff.

The Central Valley’s farmlands essentially operate as a vast lung, breathing in carbon dioxide through photosynthesis and converting it into plant tissues. That results in less of the heat-trapping gas in the atmosphere.

But the healthier the soil, the more carbon is stored in plants.

Enter California’s Healthy Soils Initiative, a statewide program rolling out this summer that is the first of its kind in the country.

“I think there’s a growing recognition that the soil beneath our feet has huge potential to sequester carbon,” said Karen Ross, secretary of the state’s Department of Food and Agriculture.

More than a quarter of California’s landmass is used for agriculture. Over generations, farming practices like monocropping and tillage have reduced the amount of organic matter in the soil, affecting plant growth. Some of that organic matter, which contains carbon, needs to be put back.

“If you don’t put carbon back in, you’re kind of mining the soil,” said Kate Scow, a professor of soil science at the University of California, Davis.

California’s initiative will give grants to farmers who take steps to reverse that nutrient loss. Those could include adding compost on rangelands or seeding fields between harvests with so-called cover crops such as grasses and mustards, which add organic matter to the soil.

State officials say such measures could eliminate from the air the equivalent of millions of tons of carbon dioxide a year.

For now, the soils initiative is funded with just $7.5 million, a drop in the bucket for a state with more than 76,000 farms. But officials hope it can be expanded after demonstrating enough interest from farmers.

To that end, they’ve pushed the program as a win-win by citing evidence showing healthy soils produce higher yields.

But many unknowns still need to be sorted out, said Cynthia Cory, director of environmental affairs for the California Farm Bureau Federation.

Even if the new measures are good for yields, whether they justify a farm’s time, labor and expense depends on its unique circumstances.