After the fires: Solano County Fairgrounds as animal evacuation center – from the Sacramento Bee

Posted on October 26, 2017 by Office of Public Affairs 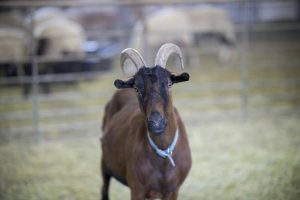 This goat was among more than 600 animals sheltered at the Solano County Fairgrounds in Vallejo. Photo from the Sacramento Bee.

As smoke and flames threatened her rural property in Suisun City, Cristina Santini’s thoughts turned to her 38 goats and sheep.

She and her husband Flavio had been told to get out ahead of the Atlas Fire that was raging in Solano County. There seemed to be no time for the couple to chase their livestock down, pack them into trailers and drive them to safety. The county seemed unlikely to help, since it was in the process of evacuating thousands of humans threatened by the flames.

“Maybe I should open the gates and let them run for their lives,” Santini recalled thinking at the time.

Instead, she and Flavio decided to phone the Solano County sheriff’s dispatch line. To her surprise, Santini recalled, animal control officers were on the scene within minutes, rounding up frightened livestock for transport to a makeshift evacuation center at the fairgrounds.

“They brought 10 people and three trailers. I’ve never seen such a hard-working crew,” Santini said. “They got all of my animals. They and the firefighters are my heroes.”

Santini’s home was mostly spared, and her sheep and goats are safe and seemingly content at the Solano County Fairgrounds in Vallejo. They were among more than 600 animal evacuees who have been sheltered and fed and received veterinary care since fires erupted across Northern California’s wine country.

Napa, Solano and Sonoma counties are known as places where some of the world’s finest wine is grown and produced. They are also a prime livestock area. Sonoma County alone is home to some 27,000 horses, mules and donkeys, according to a recent study. Rural ranchers raise sheep, llamas, goats and other creatures across the rolling hills.

The constellation of wildfires, collectively the most destructive in California history, left more than 40 people dead and thousands of structures in ashes. As the flames bore down, many residents had mere minutes to figure out what to do about their pets and livestock.

Some had to leave their animals behind, and are still searching for survivors. Others mobilized friends and family members to help evacuate horses and other livestock. Rescue groups such as the SPCA and government agencies, as well as staffers from the UC Davis Veterinary Medical Center, stepped in to search for animals and tend to the injured. Facebook pages were set up to help reunite missing pets with their people.

Animal sanctuaries also scrambled to respond to the crisis. Rescue Ranch in Vacaville packed up its chickens, pigs and sheep and headed for safer ground in Grass Valley. Employees at Safari West, an exotic animal sanctuary in Santa Rosa, evacuated, but keepers quickly returned and the agency’s animals escaped injury.

At the Solano County Fairgrounds, which has sat mostly vacant since horse racing stopped a decade ago, the county Office of Emergency Services announced a day after the fires started on Oct. 8 that it would provide a refuge for displaced livestock. A stream of trailers carrying animals flowed in, and a small army of government workers and volunteers began unloading a menagerie of refugees, including prized show horses and pet donkeys; pigs, llamas, sheep; even some fowl. Some of the displaced livestock came in with phone numbers spray painted onto their bodies to identify them in case they became lost.

“We are treating every one of them the same,” said Erin Hannigan, a Solano County Supervisor from Vallejo who has helped organize and maintain the evacuation center. “They are getting great care, and by caring for these animals we are caring for our people.”

The operation was organized chaos at first, Hannigan said, as workers welcomed an unusual mix of animals that were highly stressed and, in some cases, injured. Trucks started arriving with donated hay, feed and other supplies. Veterinarians and veterinary technicians reported to the scene to evaluate and treat animals. Other volunteers began documenting ownership of evacuees, and getting them settled in barns and stables that had been vacant for years.

Within a few days, “we were a well-oiled machine,” said Hannigan, who has gone to the property every day to offer greetings and comfort to animal evacuees and human helpers.

“I’m not that comfortable in a stall,” said Hannigan, as she patted horses whose owners fled flames threatening Calistoga last week. “But I can say hello, and welcome them, and pet them.”

Livestock owners began retrieving their animals as soon as they could confirm that their properties were inhabitable. As of (last) Thursday, the fairgrounds still held more than 100 animals, including a friendly pig named Daisy, a bonded pair of elderly horses and Santini’s livestock. Santini said she and her husband planned to reunite with their animals after repairing fencing around their property.

“We are so very grateful,” she said. “I just can’t say enough about what everyone did for us and our animals. I never imagined it would turn out this way.”

Others have been looking for pets that disappeared in the wildfires.

Sonoma County Animal Services has received some of those animals, and is working to reunite them with their owners using the social-media hashtags #tubbsfire and #LOSTPETSsonomacountyfire2017. Details are available on the agency’s website, which also is soliciting donations to pay for veterinary care and supplies for animals affected by the fires.

The UC Davis veterinary teaching hospital has treated a handful of burn survivors, including eight cats, a couple of horses and a llama, officials said. The school is collecting money through its Veterinary Catastrophic Need Fund to provide care for animals that are injured in natural disasters or other accidents. Further information is on the school’s website.

At the Solano evacuation site, Dori Pettigrew, a retired hospital administrator and former horse owner, has been working 16 to 19 hours a day tending to her charges. She is one of more than 1,500 people who have helped out at the site.

“I feel for all of the people who have lost so much,” she said. “I am an animal lover, and I have a background in safety and administration. I just felt like the best thing I could do was to be here.”

Kelly McCrary, another volunteer, said she has felt the desperation that many animal owners must have experienced when the fires ignited.

“We are no stranger to fires,” she said. “When you are in such a desperate situation, you have to leave your animals sometimes. Then you hope and pray that someone will be there to help them.”

The work at the fairgrounds has been as satisfying as it has been challenging, said Pettigrew.

“It’s so inspiring to see so many people, from young people to the elderly, giving their time selflessly and generously,” she said. “The hearts of people are good.

“When you see tears of happiness as an owner comes in and finds an animal they had lost, it makes it all worthwhile.”