From USDA: Update from APHIS Regarding a Detection of Bovine Spongiform Encephalopathy (BSE) in the United States 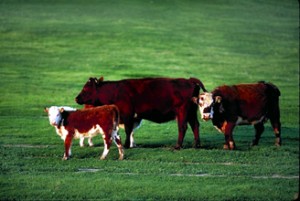 On  April 24, USDA’s Animal and Plant Health Inspection Service (APHIS) confirmed  the nation’s 4th case of Bovine Spongiform Encephalopathy (BSE) in an animal  that was sampled for the disease at a rendering facility in central California.  This animal was never presented for slaughter for human consumption, so at no  time presented a risk to the food supply, or to human health in the United  States.

After USDA’s National Veterinary Services Laboratories (NVSL)  completed testing of the samples from the index animal, the samples were sent  to The  World Organization for Animal Health (OIE) reference laboratories in Canada and  England. Both laboratories have confirmed that the index cow was positive for  atypical (L-type) BSE.

Both dairies that were previously held under  quarantine during the investigation have been released from those quarantines,  after inventories were completed and records were reviewed.

In addition, investigation of the  feed records at the index dairy premises has found no anomalies, and audits of  all the feed suppliers to the index premises have shown them to be in  compliance with the regulations.

APHIS previously announced that it has  identified two progeny of the positive cow. One progeny born to the positive  cow in the last 2 years was stillborn; the second animal was appraised,  humanely euthanized, and sampled for BSE at the National Veterinary Services  Laboratories in Ames, Iowa. Test results for that animal were negative for  BSE.

Of several hundred potential birth cohort  cattle, the focus of the tracing is on a small number (10-12) of cattle which  may still be alive and have records that might allow them to be located. The  remaining potential cohorts are no longer alive or have otherwise been ruled  out.

As the  investigation moves toward completion, local officials from the California  Department of Food and Agriculture and USDA APHIS Veterinary Services are now  in charge of the incident command.

The United States has a longstanding system of  three interlocking safeguards against BSE that protects public and animal  health in the United States, the most important of which is the removal of  specified risk materials – or the parts of an animal that would contain BSE  should an animal have the disease – from all animals presented for slaughter.  The second safeguard is a strong feed ban that protects cattle from the  disease. The third safeguard – which led to this detection – is our ongoing BSE  surveillance program that allows USDA to detect the disease if it exists at  very low levels in the U.S. cattle population.