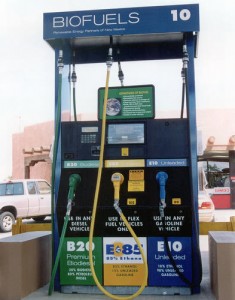 It’s been a watershed few weeks for alternative fuels in California with more than $30 million in grant funding announced recently by the California Energy Commission for research, development and distribution. At CDFA, we pay close attention to the distribution side at our Division of Measurement Standards (DMS).

One of the grants went to Propel Fuels, which will build 100 service stations in California offering gasoline, ethanol, and biodiesel fuels. Funding for projects like this is part of the California Energy Commission’s Alternative and Renewable Fuel and Vehicle Technology Program , created by Assembly Bill 118.

DMS performs quantitative and qualitative analysis of nearly all known fuels and automotive products, including alternative fuels, in its Sacramento and Anaheim laboratories. Fuel performance is tested in accordance with established, widely-used international methods. In addition, the division ensures compliance with advertising and labeling laws, thus promoting fairness and honest competition among businesses.

California law requires that all new models of commercial weighing and measuring devices, e.g. fuel dispensers, be evaluated and approved by DMS before their legal debut in commerce. That means that every E-85, biodiesel, CNG, LNG, and LPG dispenser at commercial locations in California has already been type-evaluated. Hydrogen gas dispensers have yet to pass the rigorous testing protocol, but DMS has received two applications for evaluation testing.

Which new fuels today will become mainstream tomorrow remains to be seen, but all indicators point to fuels not derived from petroleum. DMS has been protecting California drivers for 80 years with fuel quality, pump accuracy, and advertising and labeling standards; and is ramping up efforts to ensure that as new fuels emerge, consumers will enjoy the same protections as always, and businesses will comply with the same high standards.