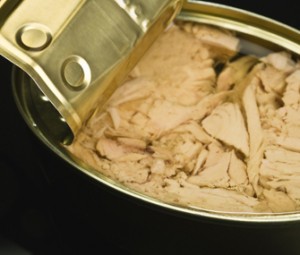 You may have heard recently that some of the largest tuna packagers in the country agreed to pay several million dollars to settle a case that started with the discovery that cans of tuna contained less fish than required by the Food and Drug Administration (FDA). Some of the cans had up to 33 percent less fish than required. This is what is known as “short measure,” a package that seems to be full but is actually not containing the proper value for the money.

CDFA’s Division of Measurement Standards (DMS) initiated the investigation after receiving a number of complaints from consumers. As investigators began their work, they learned that only a couple of locations in the U.S. had the special equipment necessary and that, fortunately, one of those was in California, at the National Oceanic and Atmospheric Administration (NOAA) in Long Beach, where personnel served as a neutral third party to perform the official testing. In all, hundreds of cans of tuna were tested. The case was a culmination of four years of investigative work.

The packaging companies, Bumble Bee Foods, LLC; Tri Union Seafoods, LLC d/b/a Chicken of the Sea International; and Starkist Co., were prosecuted for selling short measure tuna and for unfair competition. The settlement, totaling $3.3 million, was part of a stipulated final judgment filed in Riverside County on August 3, 2012. The three companies entered into the stipulation not admitting any wrongdoing, liability, or violation of law. In addition to civil penalties and agency costs, $300,000 worth of canned tuna will be distributed to food banks throughout California.

Ensuring fair competition for industry and accurate value comparison for consumers is a primary function of DMS. The state works closely with county sealers of weights and measures who, under the supervision and direction of the secretary of CDFA, carry out many weights and measures activities at the local level, including commercial device testing and pricing accuracy inspections. During this case, DMS worked with local officialsals from Los Angeles, Orange, Riverside, San Bernardino, and San Diego counties.

This entry was posted in Measurement Standards, Uncategorized and tagged Tuna fish. Bookmark the permalink.