Fairs and Farmers are Key Partners with Local Food Banks 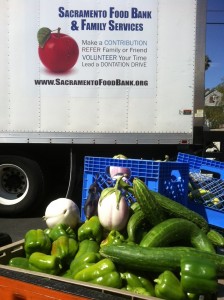 The success of food banks is based on relationships in local communities with individuals, faith-based organizations, retailers and food service businesses -just to name a few.  Additional partnerships with food producers and processors assist with sourcing local, fresh foods that can be provided to needy families. Some of these relationships have innovative roots,  and fairs are an example of that.

Each year, the California State Fair at Cal Expo features a demonstration farm, and it produces a lot of food.  So far this year, the farm has donated nearly five-thousand pounds of produce to the Sacramento Food Bank and Sacramento Foodlink – high-quality produce like what is seen in the photo to the left. Other fairs have a great tradition of giving with similar efforts. The Big Fresno Fair has raised 268,000 pounds of food over the last three years through its “Feed the Need” program. The Orange County Fair raised more than 43 tons of canned food donated by its customers. The Antelope Valley fair collected 10-thousand cans of food last year and is hoping to better that this year. Fairs in Tehama, Stanislaus, Merced, Calaveras, Lake, and Tulare counties are also providing food to the needy.

Farms play a major role in food donations, as well.  We have declared the month of December to be “Farm to Food Bank Month.” Last year, agriculture provided more than 100 million pounds of food to food banks.

As impressive as all these food donations are, we think we can do better. Improved food access is the first priority of Ag Vision, a strategic plan for California agriculture. The California State Board of Food and Agriculture is working to double California farm contributions to food banks over the next five years.

Food donations are a tremendous resource in a challenging time when one in eight Americans – nearly 46 million people – receives emergency food annually. More than four million of those people are Californians.

I commend California’s agricultural community and our fairs for sharing a commitment to help feed the hungry. I look forward to expanding access to healthy California-grown food for all Californians through partnerships with a variety of stakeholders in coming years.